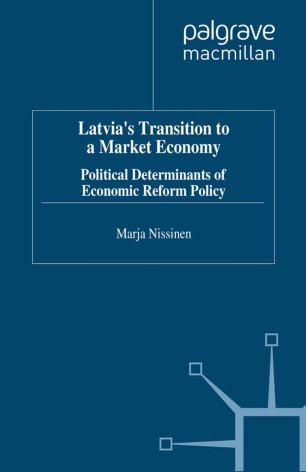 Latvia’s Transition to a Market Economy

The postcommunist transitions to a market economy raised doubts about the political sustainability of an economic reform under democracy. At the same time, they turned the attention to the centrality of political factors in economic policy-making. Latvia has succeeded in proceeding into the consolidation phase of its market reforms while remaining committed to both political pluralism and macroeconomic austerity. Even if politics were not treated as a mere constraint, the basic question is still: how are the government's adjustment choices modified in the political process?

MARJA NISSINEN is Researcher in the Group for Technology Studies, VTT/ Technical Research Centre of Finland, Espoo. She previously worked as Project Manager in the Marketing Department, Latvian Development Agency, Riga and Non-Diplomatic legation officer, the Embassy of the Republic of Latvia in Helsinki. She was Assistant of Political Science, University of Helsinki, 1992-93.