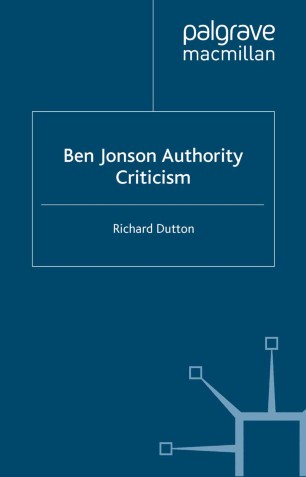 Ben Jonson: Authority: Criticism is the first book-length study of Jonson's literary criticism, and examines the ways that criticism defines his unprecedented role as a professional author. Each chapter explores a different facet: 'The Lone Wolf' looks at Jonson's role in creating a critical discourse to respond to a new literary market-place; 'Poet and Critic' explores the relationship between his 'creative' and 'critical' writing; 'Poet and State' traces his accommodations as an author with censorship and other forms of authority; 'The Laws of Poetry' relates his appeals to classical precedent to his insecurity in a world where literary conditions were very different from those of ancient Greece and Rome; 'Jonson and Shakespeare' examines the old supposed rivalry as evidence of competing definitions of authorship. Throughout Richard Dutton suggests how Jonson's criticism set the terms for the profession of letters in England for more than a century. Finally an appendix provides a representative selection of Jonson's critical work.