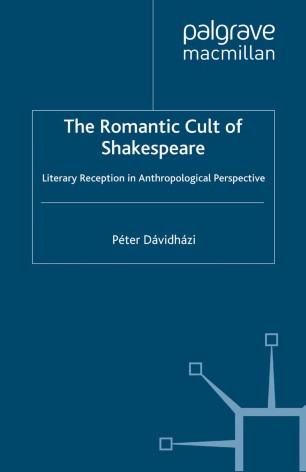 The Romantic Cult of Shakespeare

Focusing on England, Hungary and on some other European countries, the book explores the latent religious patterns in the appropriation of Shakespeare from the 1769 Stratford Jubilee to the tercentenary of Shakespeare's birth in 1864. It shows how the Shakespeare cult used quasi-religious (verbal and ritual) means of reverence, how it made use of some romantic notions, and how the ensuing quasi-transcendental authority was utilized for political purposes. The book suggests a theoretical framework and a comprehensive anthropological context for the interpretation of literature.

PETER DAVIDHAZI is Head of the Department of Nineteenth Century Literature in the Institute for Literary Studies of the Hungarian Academy of Sciences in Budapest. He previously taught English literature at Eotvos Lorand University from 1973 to 1985. He published his first book God's Second Born: Anatomy of the Hungarian Cult of Shakespeare in 1989. His second book, Our Dead Master: Janos Arany's Critical Heritage, published in 1992, was a rediscovery of a great mid-nineteenth-century Hungarian poet as an interesting proto-structuralist critic; this monograph was awarded The Book of the Year Prize in Hungary in 1993. He edited (with Judith Karafiath) Literature and Its Cults: An Anthropological Approach, a collection of studies by sixteen European scholars, published in Budapest in 1994. Recently he co-edited (with Holger Klein) Shakespeare and Hungary, published in the US in 1996. Most of his studies and essays focus on problems taken from the history of literary reception and analyse them in a context provided by cultural anthropology.