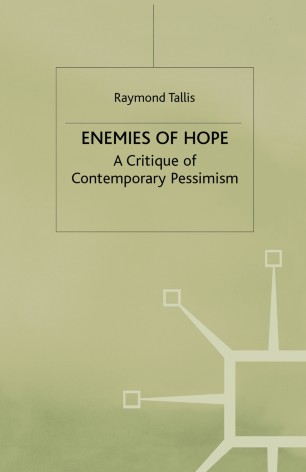 A Critique of Contemporary Pessimism

Perceptive, passionate and often controversial, Raymond Tallis's latest debunking of Kulturkritik delves into a host of ethical and philosophical issues central to contemporary thought, raising questions we cannot afford to ignore. After reading Enemies of Hope , those minded to misrepresent mankind in ways that are almost routine amongst humanist intellectuals may be inclined to think twice. By clearing away the 'hysterical humanism' of the present century Enemies of Hope frees us to start thinking constructively about the way forward for humanity in the next.

RAYMOND TALLIS was recently described in The Times Higher Educational Supplement as 'one of the most intriguing figures in the current intellectual scene'. Trained as a doctor at Oxford University and St.Thomas' Hospital, he has written extensively outside of medicine of the last 15 years. He has published short stories and poetry, and been recognized for his critiques of post-Saussurean thought, his reflections on art and science, and his discussions of the philosophy of mind. He was awarded an honorary degree of Doctor of Letters by the University of Hull in 1997 for his contributions to literary scholarship. Since 1987 he has been Professor of Geriatric Medicine at the University of Manchester and a consultant physician in Health Care of the elderly in Salford.