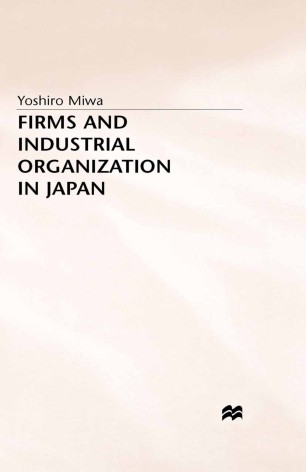 Firms and Industrial Organization in Japan

`Miwa is one of the leading young Japanese scholars debunking the myths - all too common in the west but eagerly promoted in Japan also - about the distinctive Japanese way. He soberly examines the roles of government and banks, firms and networks, workers and managers. The result is a fine analysis of how where and why the Japanese economic system fundamentally resembles that in the west, with a clear explanation of the few areas where it significantly differs.' - Leslie Hannah, London School of Economics and Political Science `Professor Miwa has earned quite a name for himself in Japan for his brilliant but biting iconoclastic views. Now, Western readers will learn what the fuss has been about. Self-styled authorities on the Japanese economy will squirm, for Miwa takes no prisoners; his logic is relentless, merciless and - inevitably - right.' - J. Mark Ramseyer, the University of Chicago Law School `This is a monumental work, demystifying the Japanese economy and contesting the conventional view that `Japan is different'. In doing so, Professor Miwa paves the way for a new era of comparative study.' - Kazuo Koike, Hosei University, Tokyo `Professor Miwa, no longer an enfant terrible, has established himself as one of the most far-reaching researchers of the contemporary Japanese industrial organisation. His argument is always pointed, provocative, outrageous, but illuminating and productive.' - Yutaka Kosai, Japan Center for Economic Research, Tokyo We love Japan, but many of us for wrong reasons. Studies of Japan's economy are full of misconceptions, described by such keywords as dual structure, keiretsu, corporate groups, main banks, subcontract, and industrial policy. Without using these keywords, the author demonstrates that Japan has for a long time been a world of exchange by agreement rather than by coercion, and that the standard principles of economics explain the dominant patterns of the Japanese economic phenomena. Providing detailed information on firms and industrial organization in Japan, this volume is a doorway both to proper understanding of Japan's economy and the study of actual firms and the market in general.