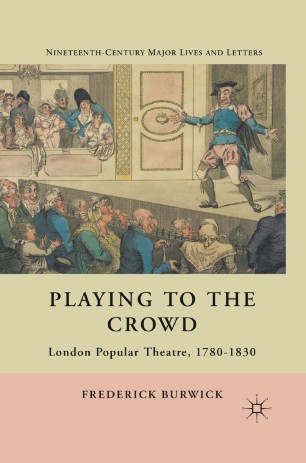 Playing to the Crowd

The first study of the productions of the minor theatres, how they were adapted to appeal to the local patrons and the audiences who worked and lived in these communities.

"[Burwick] leads us, his readers, with an exacting eye through the much neglected repertoire of London popular theater with a view to unsettling our notions of Romantic theater history, while his wholly original account of its audiences leads to a novel understanding of the great city itself in the revolutionary age. In short, it is both a book about London's theater, and a book about London and the theater from a scholar who has devoted his storied career to the subject." - The Wordsworth Circle

"Burwick places the audience at center stage in this impressively inclusive account of 'popularity' in London's theatrical underworld. Based on extensive archival research, and with a cast of brilliant characters, Playing to the Crowd takes a bracingly fresh look at Romantic-era theatre and makes us rethink a subject we thought we already knew." - Nicholas Roe, Professor of English, University of St. Andrews

"In Playing to the Crowd, Burwick brings his massive erudition to bear upon the popular theaters of early nineteenth-century London. This wide ranging study explores the relationship between particular theaters, playwrights, and stage managers and the local London neighborhoods they sought to entertain. For the first time, we get an account of how popular theaters in London were defined by class and ethnicity, with, for example, audiences at the working class transpontine theaters reveling in the exploits of heroic waterman or crowds from London's 'Little Italy' thrilling to depictions of the Foscari and Masaniello. As Burwick takes us through London's theatrical neighborhoods, we learn of how Moore used his satiric talents to dramatize the situation in Ireland, how Schiller's Tell was rendered melodramatic to appeal to London's German population, and how Coleridge's Zapolya was fitted to audiences craving Gothic terrors by highlighting its allusions to the legend of the werewolf. This book is essential reading to anyone interested in the drama and theater of the nineteenth century." - Jeffrey N. Cox, Professor of English and of Comparative Literature and Humanities, University of Colorado at Boulder