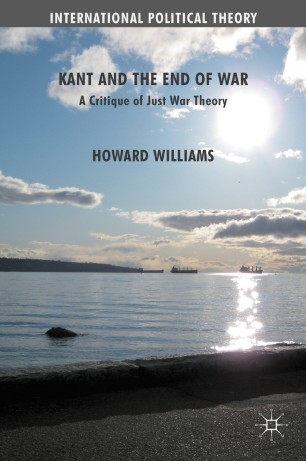 Kant and the End of War

A Critique of Just War Theory

The paperback edition (published in 2016) includes a new preface with a discussion of recent examples.

Kant stands almost unchallenged as one of the major thinkers of the European Enlightenment. This book brings the ideas of his critical philosophy to bear on one of the leading political and legal questions of our age: under what circumstances, if any, is recourse to war legally and morally justifiable? This issue was strikingly brought to the fore by the 2003 war in Iraq. The book critiques the tradition of just war thinking and suggests how international law and international relations can be viewed from an alternative perspective that aims at a more pacific system of states. Instead of seeing the theory of just war as providing a stabilizing context within which international politics can be carried out, Williams argues that the theory contributes to the current unstable international condition. The just war tradition is not the silver lining in a generally dark horizon but rather an integral feature of the dark horizon of current world politics. Kant was one of the first and most profound thinkers to moot this understanding of just war reasoning and his work remains a crucial starting point for a critical theory of war today.

Howard Williams is Emeritus Professor in Political Theory, Aberystwyth University and Honorary Distinguished Professor in the School of Law and Politics, Cardiff University. He has written numerous monographs on political philosophy, and he is currently editor of the journal Kantian Review.

'William's book combines careful but readable exegesis of Kant's texts with a close critical engagement both with the scholarship of other Kantians and the arguments of the just war theorists he seeks to challenge...it is a substantial and important contribution to current debates in international ethics and political theory.' - Christopher Finlay, University of Birmingham, International Affairs