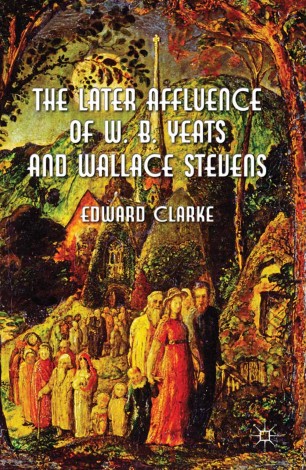 The Later Affluence of W. B. Yeats and Wallace Stevens

Surveying the later work of W.B. Yeats and Wallace Stevens, Edward Clarke unfolds their very last poems and considers the two poets' relations with western literature and tradition. This book shows how these two latecomers transform the ways in which we read earlier poets.

EDWARD CLARKE tutors visiting students in English literature at St Catherine's College, Oxford University, UK. He has published work in the Wallace Stevens Journal, and contributed to Essays and Reflections on John Berryman (2006) and The Greenwood Encyclopaedia of American Poetry and Poetics (2006).

'The major strengths of this important and detailed study of two endlessly fascinating poets are its seriousness and ambition; its commitment to poetry and especially to a trained meditative slowness in reading poetry; its concern with the link between poetry and spirituality; its erudition and knowledge of relevant criticism; and its clear, spirited and nuanced style.'

'Later Affluence is a truly innovative book challenging what poetry criticism has become in these sceptical times. Clarke insists on dense, original close readings of two late poems by Yeats and two by Stevens to elaborate how these poems articulate a 'spiritual capability'. This capability is nourished by the capacity to take seriously and literally the space opened by conversation with tradition about what the literary imagination can do, and in so doing become identical with what it projects. To my knowledgeprevious readings of Stevens are only pale shadows of Clarke's unfolding of Stevens' visionary side; and there is nothing comparable in Yeats studies since Allen Grossman's brilliant efforts at a literal reading of The Wind Among the Reeds.'

'Edward Clarke is an ambitious, daring critic, who does not hesitate to deal in the spiritual dimensions opened up by his chosen poets; but he does so with a keen ear for verbal nuance and for the subtle force of literary influence.'