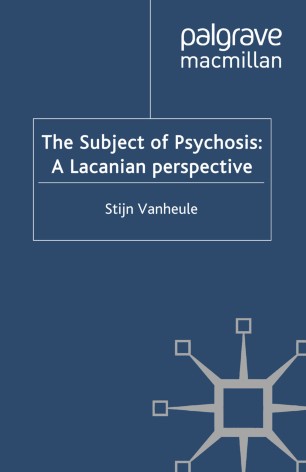 The Subject of Psychosis: A Lacanian Perspective

This book discusses what Jacques Lacan's oeuvre contributes to our understanding of psychosis. Presenting a close reading of original texts, Stijn Vanheule proposes that Lacan's work on psychosis can best be framed in terms of four broad periods.

STIJN VANHEULE is Associate Professor in the Department of Psychoanalysis and Clinical Consulting at Ghent University, Belgium, and a Clinical Psychologist and Psychoanalyst in Private Practice. He is the author of multiple papers on Lacanian and Freudian psychoanalysis, psychoanalytic research into psychopathology, and clinical psychodiagnostics.

"[Vanheule's] clear expository style displays an impressive command of Lacanian theory that will be instructive for anyone who wishes to grasp the difficult logic of Lacan's project. [ ] The Subject of Psychosis may be the clearest and most rigorous analysis of Lacanian theory in print." Journal of the American Psychoanalytic Association

"This text offers an excellent reading of Lacan's development of a theory of the subject of psychosis that should serve as a springboard into the practise of the psychoanalytic clinic today." - Theory and Psychology

"The Subject of Psychosis: A Lacanian Perspective is an extraordinarily clear decomposition of Lacan's trajectory from surrealist concerns with representations of madness to literary attempts to signifierise it." Psychoanalytical Notebooks

"An important contribution to Lacanian work in English, Vanheule's text is a much-needed, theoretically clear, lucid, sophisticated and critical understanding of Lacanian theory on psychosis." - Psychoanalysis, Culture and Society