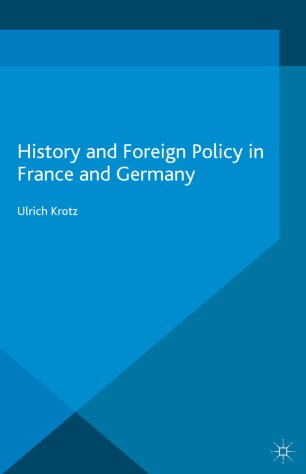 Why do states similar in size, resources and capabilities significantly differ in their basic orientations and actions across major domains in foreign policy, security and defense? This book addresses this important question by analyzing the major differences between the foreign policies of France and Germany over extended periods of time.

Ulrich Krotz is a professor at the European University Institute in Italy, where he holds the Chair in International Relations in the Political Science Department and the Robert Schuman Centre for Advanced Studies. He is Director of the Schuman Centre's programme on Europe in the World.

''Ulrich Krotz's History and Foreign Policy convincingly theorizes William Faulkner's fundamental insight about history 'The past is never dead. It's not even past.' By establishing the centrality of history as a causal variable in the formation of French and German foreign policy, he makes a signal and singular contribution to the study of comparative foreign policy.'' James C. Sperling, Professor of Political Science, University of Akron, USA

''A timely, and yet timeless, approach to understanding the foreign policy orientations of France and Germany grounded in their national role conceptions, as well as the resulting broader implications for EU foreign and security policy and world order.'' Cameron G. Thies, Professor and Director, School of Politics and Global Studies, Arizona State University, USA