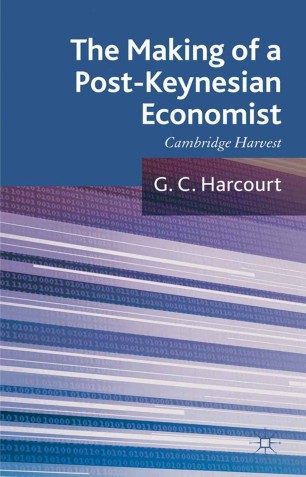 The Making of a Post-Keynesian Economist: Cambridge Harvest

The Making of a Post-Keynesian Economist: Cambridge Harvest gathers up the threads of the last decade of the author's twenty eight years in Cambridge, before his return to Australia. The essays include autobiography, theory, review articles, surveys, policy, intellectual biographies and tributes, and general essays.

G. C. HARCOURT Emeritus Reader in the History of Economic Theory, Cambridge (1998), Emeritus Fellow, Jesus College, Cambridge (1998), UK, and Professor Emeritus, Adelaide (1988), is now a Visiting Professorial Fellow at the School of Economics, UNSW, Australia. He is the author and editor of many books, articles and chapters in books. His books include Some Cambridge Controversies, The Theory of Capital, The Structure of Post-Keynesian Economics, (with Prue Kerr) Joan Robinson and nine volumes of selected essays.

'It's better to engage with those we disagree with than to ignore them. The least we get is a firmer grasp of our own views, but sometimes we gain more: a change in them because we've lost an argument. Geoff Harcourt's heterodox ideas are sometimes discomfiting, but they are also immensely stimulating. These essays demand careful attention, particularly from anyone who is still comfortable with today's economic orthodoxies.' - David Laidler, Professor Emeritus, University of Western Ontario, London, Canada

'Now more than ever before it is important for a rounded account to be published of how an alternative approach to economics might develop. Here we have a selection from the latest contributions of one of the most central figures in Post Keynesian economics. These papers exemplify all aspects of the development of his economics. In them Geoff Harcourt ranges from philosophy to theory to policy to the (always generous) critical analysis of the contributions of fellow-economists, all with an eye to addressing issues of social justice in the current economic environment.' - Sheila Dow, Emeritus Professor of Economics, University of Stirling

Geoff Harcourt's essays embody that rare combination of insight and creation. His often provocative tone is revealed in genres ranging from biographical to critical reviews and development of theoretical issues, both implicit and explicit, in historical and contemporary economic theory. His essays demonstrate the possibilities of using different methodologies and of analyses at different levels of abstraction. The implications of these theoretical ideas extend to policy where his vision of a good society becomes clearest in both the means and the ends. This collection inspires the reader to reach beyond their own expectations of themselves. - Dr. Prue Kerr, University of Adelaide, Australia