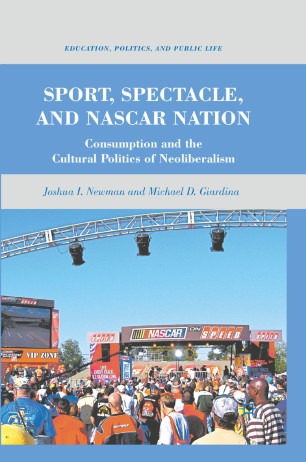 Consumption and the Cultural Politics of Neoliberalism

Sport, Spectacle, and NASCAR Nation critically interrogates stockcar racing's ascendance into the upper-echelon of the North American sporting popular. While most contributions to the public discourse gloss over NASCAR's exclusively white racial identity politics, its underlying patriarchal gender politics, its overtly conservative political commitment, its hyper-Christian orthodoxy, and its omnipresent commercialism, this book connects the dots and critically analyzes the problematic nature of this non-natural, strategically-orchestrated sporting spectacle.

Joshua I. Newman lectures in the areas of sport and physical culture, qualitative research, cultural studies, and critical pedagogy in the School of Physical Education at the University of Otago (New Zealand).Michael D. Giardina is an assistant professor in the Department of Sport Management at Florida State University.

"This groundbreaking text is more than just a fascinating and well-researched account of one of America s most popular spectator sports; it is also an urgent and necessary explication of the current troubled state of the United States in the context of the recent growth of Christian fundamentalism and militaristic nationalism. Sport, Spectacle, and NASCAR Nation is essential reading for anyone interested in contemporary American politics and the central role that sport continues to play in reshaping the American Dream. " - Ben Carrington, University of Texas at Austin; author of Race, Sport and Politics: The Sporting Black Diaspora

"Arguably the most comprehensive contextualization of twenty-first century American sport culture; a compelling, powerful, and indeed invaluable antidote to the public pedagogy of the NASCAR spectacle" - David L. Andrews, University of Maryland; author of Sport-Commerce-Culture: Essays on Sport in Late Capitalist America

"Closely argued and deeply researched, this freewheeling study takes readers to the intersections of politics and spectacle, of race and representation, of South and North. It shows how the dizzying speed of the market and the seeming traditionalism of fundamentalist religion coexist in US conservatism." -David R. Roediger, University of Illinois; author of How Race Survived U.S. History: From Settlement and Slavery to the Obama Phenomenon