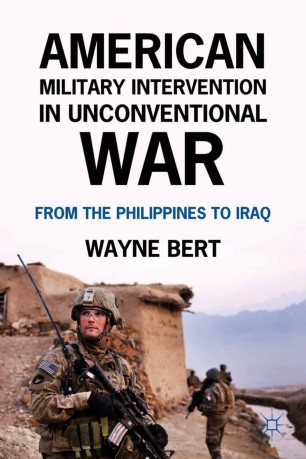 From the Philippines to Iraq

A study of the major U.S. military interventions in unconventional war, this book looks at four wars that occurred while the U.S. was a superpower in the post-war WW II period and one in the Philippines in 1898.

WAYNE BERT served as a policy analyst in the US Defence Department and taught at Wilmington College, USA.

"Wayne Bert provides a thoughtful assessment of previous American military actions. In doing so, the author makes an excellent case for tempered and rational assessments of military action, prior to the initiation of force." - Political Science Quarterly

"Wayne Bert has written a serious, but very readable, study of the combination of idealism and aggressiveness that for more than a century has resulted in U.S. military interventions that almost always have failed to accomplish their objectives - either for the United States or for the target peoples and countries. Bert shows that in most cases, from the Philippines at the turn of the 20th century to Iraq in the early 21st century, the United States had no clear national security interest involved before intervention. Moreover, the 'American style of war,' which relies on overwhelming materiel superiority, was ill suited to the low-intensity warfare that ensued. As a result, he concludes, "One could make an idealistic case for all these wars, but no matter how desirable the outcome, there would still be the problem of persuading the listener that the benefits of the intervention exceeded the political, economic and human costs it sustained for both the United States and the target country." The case studies in which Bert develops his argument demonstrate the impact of ethnocentrism, even racism, on the making and execution of U.S. policy, as well as the serious difficulty until very recently in Iraq and Afghanistan that the United States has had in adapting military policy to the realities of insurgency.The reader concerned about putting the recent U.S. experiences in Afghanistan and Iraq into historical context will find American Military Intervention in Unconventional War a thoughtful and thought-provoking introduction to the topic. The book should become required reading for any future team of U.S. security advisors considering overseas military intervention." - Roger E. Kanet, Professor, University of Miami