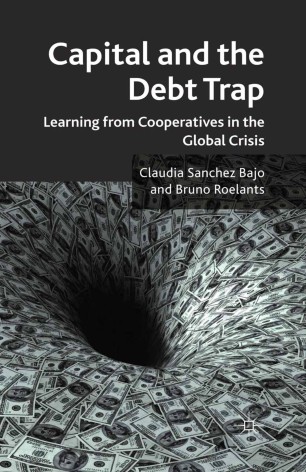 Capital and the Debt Trap

Learning from Cooperatives in the Global Crisis

The financial crisis is destroying wealth but is also a remarkable opportunity to uncover the ways by which debt can be used to regulate the economic system. This book uses four case studies of cooperatives to give an in-depth analysis on how they have braved the crisis and continued to generate wealth.

CLAUDIA SANCHEZ BAJO has a PhD in development studies (ISS, The Hague). She is Chair in Co-perative Enterprises within the Faculty of Business and Economics at the University of Winnipeg, Canada. She has lectured in The Netherlands, Germany, China and Latin America. She has published The Political Economy of Regionalism – Business Actors in Mercosur in the Petrochemical and Steel Industrial Sectors (2001), and contributed to The Political Economy of Regions and Regionalisms (2005).

BRUNO ROELANTS has a Master's in labor studies. He is Secretary General of CICOPA, the sectoral organization of the International Cooperative Alliance for industrial and service coperatives. He has worked on development projects in China, India and Eastern Europe, and coordinated the cooperative negotiating group on ILO Recommendation 193 on the Promotion of Cooperatives. He has lectured on cooperatives and local development in Italy and is co-author of Cooperatives, Territories and Jobs (2011).

'This elegant and deeply-informed inquiry weaves together several themes, each significant in itself, even more so as their relations are developed: the deep and persistent crises of capitalism, in the current phase highly financialized, and the fundamental issue of decision-making in social and economic institutions, with special attention to the elaborate growth of cooperatives of many varieties, the forms they have taken, the problems they face, and their great promise in overcoming economic crises, social malaise, and democratic dysfunction.' - Professor Noam Chomsky, Massachusetts Institute of Technology, USA

'Capital and the Debt Trap combines a searing critique of the unstable debt- and-profit driven system that came close to final collapse in the Great Crisis with a fine portrait of the modern cooperative alternative that exists today in Mexico, Canada, France and Spain. Are these perhaps the small creatures that will survive and flourish after the great dinosaurs are gone? Let's hope so.' - James K. Galbraith, Lyndon B. Johnson School of Public Affairs and University of Texas at Austin

'This book is simply a masterpiece on cooperativism for the xxi century. It outstandingly demonstrates why cooperatives are more resilient to the crisis and avoid falling into the dept trap and its implacable cohort of inhuman effects. A decisive contribution not only to economic democracy but also to Democracy as a political system.' - Yves Cabannes, University College London

'This is a timely and important book which both analyses current economic turmoil and shows how the crisis may foment new and more co-operative forms of enterprise. Anyone interested in advancing the cause of participatory ownership as one means of guarding against recurrent crises should read this book.' George Irvin, School of Oriental and African Studies, University of London

'This book presents a thoughtful and exciting consideration of the roles cooperatives can play and should be expected to play today . . . It deserves to be widely read and discussed within and across the boundaries that have long divided cooperative proponents and the general public.' Ian MacPherson, University of Victoria, Canada

'This book is a major step forward in understanding the working of co-operative economies. Its appearance could hardly have been more timely. At a point when the global financial system and the models of economic governance have been thrown into question, it shows how it is that co-operative financial systems are more crisis resistant than contemporary private banking, and how finance can be structured to service long term local and industrial growth rather than subject it to the imperative of short term profitability. More generally, the authors describe an architecture of co-operative governance that has not only been innovative and resilient but is particularly well suited to any post crisis world that is reshaped round multi stakeholder engagement.' - Robin Murray, LSE Global Governance and author of Co-operation in the Age of Google.

'This study on the current global crisis of capitalism is a surprising and fascinating analysis of the transformation that the current dominant world mode of production has gone through. The great merit of the book is to indicate the path to this change with great accuracy and richness of data. That is, the economy needs to return to the realm of the stakeholders. It is difficult to emphasize the appropriateness and importance of this work.' Paul Singer, University of São Paulo and Secretary of State for the Solidarity Economy of Brazil.

We have been falsely made to believe that competition is the way nature and society work. However, greed and competition are dis-values imposed by corporate rule. Both nature and society work on the principles of co-operation. In Capital and the Debt Trap - Learning from Cooperatives in the Global Crisis Bruno Roelants and Claudia Sanchez Bajo show us how an economy based on co-operation can address the deep crisis we face.' - Vandana Shiva, Navdanya/Research Foundation for Science Technology & Ecology, New Delhi.