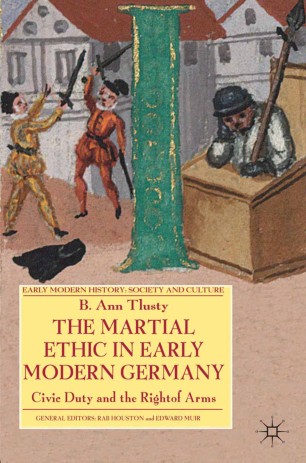 Civic Duty and the Right of Arms

For German townsmen, life during the sixteenth and seventeenth centuries was characterized by a culture of arms, with urban citizenry representing the armed power of the state. This book investigates how men were socialized to the martial ethic from all sides, and how masculine identity was confirmed with blades and guns.

B ANN TLUSTY Professor of History at Bucknell University in Pennsylvania, USA. Her publications include Bacchus and Civic Order: The Culture of Drink in Early Modern Europe (2001) and the co-edited collection The World of the Tavern: Public Houses in Early Modern Europe (2002), as well as numerous articles on gendered behaviours including drinking, duelling, gambling, and fraud.

'A well-written treatment of an important topic, which offers an ambitious analysis of the relationship between the right of German townsmen to bear arms and early modern understandings of citizenship, honour and gender.' - Christopher R. Friedrichs, University of British Columbia, Canada

'This is a highly original and ground-breaking study that brings to life a key aspect of early modern society...Tlusty is the first to fully investigate this martial ethic as part of German politics -a politics, as she keeps emphasizing, best seen as a practice rather than a set of abstract ideas. The unintended effects of this phenomenon are skilfully brought into view as is its longevity.' - Ulinka Rublack, The Journal of Modern History