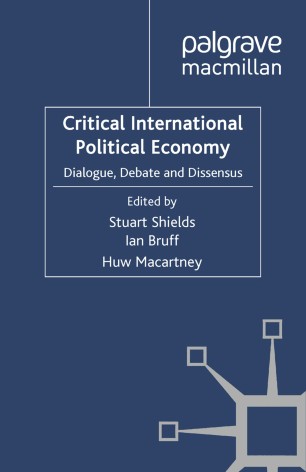 Amidst the continued debate surrounding the foundations of IPE and recent methodological and theoretical divides, the authors argue that an attempt should be made to re-visit the notion of the 'critical'. They assess the development of so-called critical IPE and interrogate whether the theoretical foundations it was built upon have reached their potential. This challenge is taken up in a number of different ways, but all share a common concern: to re-assess the purpose of critical approaches and to reflect on why certain social theorists have been favoured as a point of departure, yet others have largely been ignored. In light of recent debates on the notion of a 'trans-Atlantic divide' within IPE, this book demonstrates how the distinction between the 'critical' and the 'orthodox' (or 'empirical') is only significant if the 'critical' is geared towards a larger, more substantial body of critical social enquiry and engages with what it means to conduct such enquiry.

Huw Macartney is Lecturer in Political Economy at the University of Birmingham, UK. He is the author of European Democratic Legitimacy and the Debt Crisis (2013) and Variegated Neoliberalism: European Varieties of Capitalism and International Political Economy (2010).

"Cause for celebration: a 'critical' volume on IPE that is worthy of the name. This innovative text is not only a good read but a crucial contribution at a critical moment. It breaks out of stale boxes and sterile debates, asks silenced questions, takes us in new directions, and gets real about being critical." – V. Spike Peterson, University of Arizona, USA

"A key strength of this volume is its reflexive and broadly approached understanding of what is critical, which extends to questioning the term itself, and that it poses important questions for further research. I recommend it to scholars in IR and IPE plus those working on social theory and the history of ideas, as well as to postgraduate and PhD students." – Ulrich Brand, University of Vienna, Austria

"'Critical IPE' is commonly criticised as an umbrella term for a head-nodding, self-referential ensemble of Post-Marxists and Post-Structuralists moaning into the void of late capitalism. Shields, Bruff and Macartney correct this depiction and have assembled a range of thoughtful essays, commentaries and polemics to challenge not only the orthodoxy in the field of IPE but also Critical IPE scholars." – Leonard Seabrooke, Copenhagen Business School, Denmark

"A pathbreaking survey of the state of IPE drawing lessons from the past and confronting the challenges of the 21st century." – Anastasia Nesvetailova, City University London, UK

"The authors certainly succeed in their aim of providing an overview of critical IPE and, what I appreciate just as much, they are not afraid to 'stress that critical IPE remains contested' trhoughout the book. The book thus serves its task very well to bring critical IPE closer to scholars. One may only hope that empirical research will bbuild on its theoretical rigor." - Tomáš Profant, International Issues & Slovak Foreign Policy Affairs
Buy options