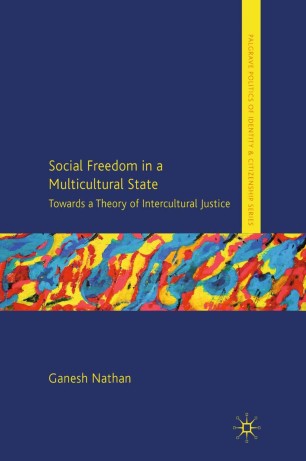 Social Freedom in a Multicultural State

Towards a Theory of Intercultural Justice

The politics of multiculturalism faces challenges in Western democratic states. Arguing that this setback is based on the notion of culture as separate and distinct, this book explores how to face current challenges to multiculturalism without reifying culture, group and identity.

GANESH NATHAN lectures in Business and Politics at the University of Applied Sciences, Northwestern Switzerland and private business schools in Lausanne and Zurich. His current research interests include responsible governance and leadership.

'Switzerland, as many other countries, has to face questions raised by a multicultural society. Your book will doubtlessly play a part in the discussions that have to take place in order to address this issue.' - Micheline Calmy-Rey, President of the Swiss Confederation

'This powerful defence of a theory of intercultural justice is to be warmly welcomed. It offers a provocative and original perspective on the difficult problems of multicultural justice that confront us today.' - Simon Thompson, Reader in Political Theory, University of the West of England, UK

'This is an insightful, important contribution to the growing literature on the compatibility between republicanism and cultural pluralism. Drawing on Pettit's conception of non-domination and on non-essentialist, social interactionist theories of cultures and identities, Ganesh Nathan considerably renews our understanding of the demands of justice, freedom and recognition in pluralistic societies.' - Professor Cécile Laborde, Department of Political Science, University College London, UK

'I found it both interesting and politically timely.' - Dr. Anthony Corones, School of History and Philosophy, University of New South Wales, Australia

'This book is very useful in mapping the current debates in multicultural politics.' - Ethnic and Racial Studies

'One of the most admirable features of this book is the nuanced analysis of the dynamics of social interaction, and Nathan is consistently sensitive to the complex circumstances of multicultural domination and misrecognition.' - Political Studies Review