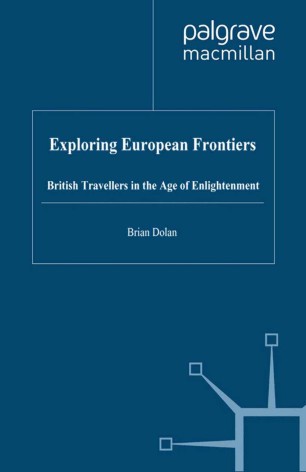 British Travellers in the Age of Enlightenment

The explorations of eighteenth-century travellers to the 'European frontiers' were often geared to define the cultural, political, and historical boundaries of 'European civilization.' In an age when political revolutions shocked nations into reassessing what separated the civilised from the barbaric, how did literary travellers contemplate the characteristics of their continental neighbours? Focusing on the writings of British travellers, we see how a new view of Europe was created, one that juxtaposed the customs and living conditions of populations in an attempt to define 'modern' Europe against a 'yet unenlightened' Europe.

BRIAN DOLAN is Research Lecturer at the Wellcome Unit for the History of Medicine at the University of East Anglia. After earning his PhD at the University of Cambridge he taught historiography of science at Umeå University in Sweden, and the history of the life sciences at the Wellcome Institute for the History of Medicine in London. He has published on the history of scientific illustration, geology, and chemistry, and is the editor of Science Unbound: Geography, Space, and Discipline (1998).

An exciting addition to that space on the scholar's bookshelf between Edward Said's Orientalism and Mary Louise Pratt's Imperial Eyes. It focuses on the literature of travel, but by targeting areas on the margins of Europe visited at the turn of the nineteenth century by English travellers - notably, the Far North and the Middle East - it unpicks easy assumptions about 'West' and 'East' and presents a more complicated, yet intellectually more sophisticated and more satisfying account of cultural encounter in a key stage in the formation of concepts of national identity and ethnographic science.' - Colin Jones, Department of History, University of Warwick

'A thoughtful and far-reaching account that uses travel to throw fresh light on eighteenth-century thought. Aside from the inherent importance of the subject this is a great pleasure to read.' - Jeremy Black, Professor of History, University of Exeter

Through the writings of Clarke and other travellers, Dolan provides a fascinating picture of how peoples on the margins of Europe were depicted and defined...The book is particularly successful in explicating intellectual history of different kinds and relating it to the travel reports. The polymath traveller of the eighteenth century had interests ranging from botany to political economy. To make all these comprehensible to the reader, as Dolan has, is no small achievement.' - Katherine Edgar, The Times Literary Supplement