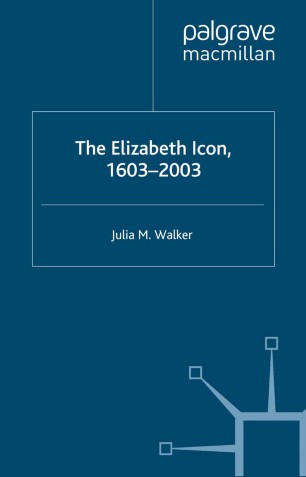 Surveying four-hundred years of British history, Walker examines how the memory - the icon - of Queen Elizabeth has been used as a marker for Englishness in disputes political and social, in art, literature and popular culture. From her second Westminster tomb to the pseudo-secret histories of the Restoration, from Georgian ballads to Victorian paintings, biographies, children's books, Suffragette banners, novels and films, trends in scholarship and rubber bath ducks, the icon becomes more powerful as the idea of Englishness becomes more arbitrary.

JULIA M. WALKER is Professor of English and Women's Studies at the State University of New York at Geneseo, and the editor of Milton and the Idea of Woman (1988), Dissing Elizabeth (1998), and the author of Medusa's Mirrors: Spenser, Shakespeare, Milton, and the Metamorphosis of the Female Self (1998). She received the Milton Society's Hanford Award for the Most Distinguished Milton Essay of 1997.

'This book deals strikingly with the importance of memory and how the different recollections of Elizabeth I open up new ways of understanding English politics and culture from the Seventeenth-century to our own. Walker examines numerous representations and writes in a conversational style that will be accessible to a wide-ranging audience.' - Carole Levin, Willa Cather Professor of History at the University of Nebraska, Lincoln, USA

'Julia Walker's The Elizabeth Icon is not just a scholarly tour de force - it is also critically innovative in its exploration of changing memorialisations of the Virgin Queen. Walker brings a new level of intellectual understanding and clarity to her analysis of a crucial yet neglected element within British historical self-consciousness: the changing reception and transmission of ideas of individual monarchs. In this compelling study, she shows how a series of cultural as well as historical contingencies have contributed to the changing definition of a key emblem, not simply of British monarchy, but also, more generally, of Britain itself.' - Fellow and Director of Studies in English, King's College, Cambridge University

'Walker's topic is broad: a cultural history of Elizabeth's image since her death. It is enjoyably omnivorous in scope, taking in children's novels, the War of Jenkins's ear, engravings, teapots, plays, Punch cartoons and film, and sashaying into eBay, the future of archival research and weapons of mass destruction.' - Women: A Cultural Review