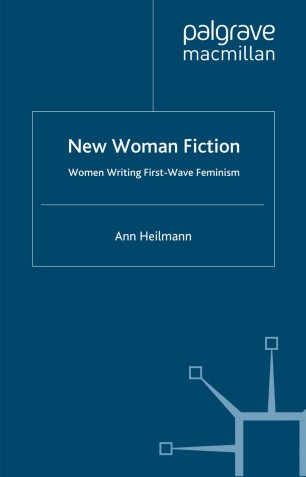 The New Woman was the symbol of the shifting categories of gender and sexuality and epitomised the spirit of the fin de siècle . This informative monograph offers an interdisciplinary approach to the growing field of New Woman studies by exploring the relationship between first-wave feminist literature, the nineteenth-century women's movement and female consumer culture. The book expertly places the debate about femininity, feminism and fiction in its cultural and socio-historical context, examining New Woman fiction as a genre whose emerging theoretical discourse prefigured concepts central to second-wave feminist theory.

ANN HEILMANN is Senior Lecturer in English at the University of Wales Swansea. She has edited an anthology on The Late-Victorian Marriage Question: A Collection of Key New Woman Texts (1998).

contribution to the growing body of work on this fin de siecle phenomenon. It discusses a wider range of writers and texts than earlier studies of this body of writing, and locates both the writers and texts more clearly and more firmly in the context of late nineteenth 'feminism' than have earlier studies. It also seeks to draw parallels between this 'first wave' of feminism and the 'second wave' feminism of the latter part of the twentieth century. This has the effect of simultaneously broadening and narrowing the corpus of New Woman writing: more texts are put on display, but New Woman writers are more specifically (and perhaps more narrowly) defined as 'committed feminists with a vision of social regeneration through didactic literature [through which] they sought to reach and politicize a mass readership.' This lucid study offers an historically

grounded and theoretically informed introduction to an important aspect of the history of women's writing.' - Lyn Pykett, Professor of English, University of Wales, Aberystwyth