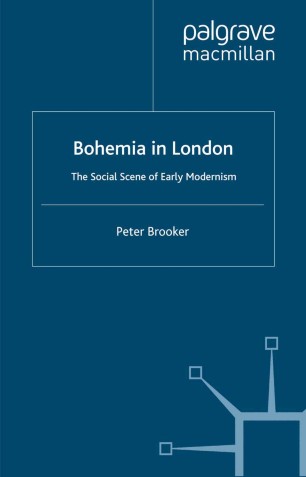 The Social Scene of Early Modernism

This original study discovers the bourgeois in the modernist and the dissenting style of Bohemia in the new artistic movements of the 1910s. Brooker sees the bohemian as the example of the modern artist, at odds with but defined by the codes of bourgeois society. It renews once more the complexities and radicalism of the modernist challenge.

PETER BROOKER is Professor of Modern Literary and Cultural Studies at the University of Nottingham, UK. He has written widely on contemporary writing and theory and is the author of Bertolt Brecht: Dialectics, Poetry, Politics (1989), New York Fictions (1996), Modernity and Metropolis (2004) and A Glossary of Cultural Theory (1999, 2003). With Andrew Thacker, he is editor of The Geographies of Modernism (2005) and co-director of the AHRC-funded Modernist Magazine Project.

'It is a thoroughly engaging work, at ease with a wide range of materials and tonally responsive to them. Brooker has a winning way with the gossip of the period, creating a lively sense of the personalities involved...Brooker's enthusiasm for and fascination with his materials is everywhere contagious, and I would reckon that his book will be prominent on undergraduate and graduate reading lists as a privileged point of entry into a world which otherwise seems strikingly remote.' - Peter Nicholls, Professor of English and American Literature, University of Sussex

'Pound, Lewis, Ford and Eliot form the principal cast of London's early Twentieth-century Bohemia, vividly put on stage by Peter Brooker in his drama of change, transformation and the re-making of culture in a city alive with art but almost consumed by controversy. A book that takes us from the Café Royal, where Wilde once held sway, to the less elegant Vienna café where Pound challenged Lewis and new art was born. Manners and modernism confront tradition and taste in this remarkable and readable account.' - Ira B. Nadel, Professor of English, University of British Columbia

'...the most important examination of English Modernism published since Michael Levenson's A Genealogy of Modernism two decades ago. It provides an essential cultural history of the emergence of modernism in the 1910s...' - John Brannigan, School of English and Drama, University College Dublin

'Bohemia in London lives up to the promise of its blurb to bring 'new life and depth to the legendary anecdotes of the usual history'... a stimulating and impressively detailed study, which brings to life the metropolitan scene that provided the social conditions of early modernism.' - Review of English Studies