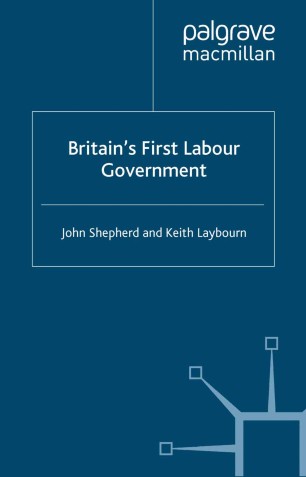 This volume is the first major account for nearly fifty years to critically re-assess Labour's first period in office in terms of domestic, foreign and imperial policy. It draws on a wide range of private papers and official sources and reconstructs the history of this forgotten government in the broader social and political context of the 1920s.

JOHN SHEPHERD is Professor of History at the University of Huddersfield. John was educated at Borough Road College (BA General and Teachers' Certificate) and Birkbeck College, University of London (BA Hons and PhD). He has published extensively on British Political and Labour History. He has held posts in schools, polytechnics and universities, including Visiting Professor, Senior Research Associate and Joint-Director of the Labour History Research Unit at Anglia Ruskin University, Cambridge. He is a Fellow of The Royal Historical Society, and was previously President of the Cambridge Branch of The Historical Association and a training consultant to a number of organisations

KEITH LAYBOURN is Professor of History at the University of Huddersfield, UK and is a Fellow of The Royal Historical Society. He is also the Diamond Jubilee Professor of the University of Huddersfield. He has published over sixty articles and thirty seven books including Britain on the Breadline: A Social and Political History of Britain 1918-1939 (1998), Unemployment and Employment Policies Concerning Women in Britain 1900-1951 (2002), A Century of Labour (2000) and Marxism in Britain: Dissent, Decline and re-emergence, 1945-c.2000 (2005).

'The first Labour government of 1924 is easily the least well-known. John Shepherd and Keith Laybourn provide here a lucid, well-researched account of its complex beginnings, its policies especially in foreign affairs, and the dramatic and mysterious nature of its downfall. They are able to show Ramsay MacDonald's first premiership as an important episode, which raised new social issues, hastened the collapse of the Liberals, and legitimized Labour as a party of power.' - Professor Kenneth Morgan, Brunel University, London

'A much-needed reappraisal of the first Labour government, based on thorough archival research and a command of the secondary sources, Britain's First Labour Government fills a major gap in twentieth-century British history. Astute and a pleasure to read, it very ably reassesses the record of Ramsey MacDonald and his colleagues. A major and impressive contribution to twentieth-century British history and to the history of the Labour Party.' - Professor Chris Wrigley, The University of Nottingham

'In this ground-breaking and fascinating assessment of the first Labour government, the authors skilfully show how courageously the 'new boys (and girls)' on the block asserted both their independence and their principles.' - Professor Denis Judd, London Metropolitan University

'A welcome and well-researched reassessment of the first Labour government of 1924.' - BBC History Magazine

'...this is an important monograph, providing essential elements in any personal evaluation of Labour's action in 1924...The book has a fairly detailed Index and the state-of-the-art Bibliography (including recent Ph.D. theses) will be found invaluable for students and teachers alike.' - Antoine Capet, Cercles