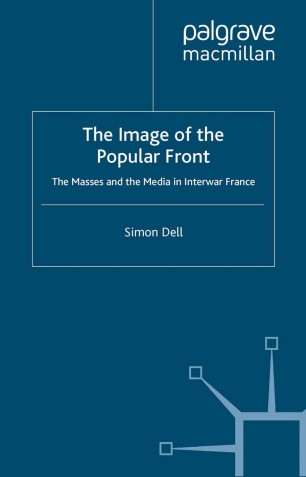 The Image of the Popular Front

The Masses and the Media in Interwar France

During the 1930s Europe was convulsed by political violence. The National Socialists rose to power in Germany and Fascists campaigned in Britain, Spain and France. Yet Europe was also transformed in this decade through new applications of film, photography and radio. In fact, these political and technological developments were closely intertwined.

SIMON DELL is Lecturer in Art History in the School of World Art Studies and Museology at the University of East Anglia, UK.

'In this profound study of a moment in the political imagination of the Left in France, Dell demonstrates that the notion of a struggle for freedom is at the same time a struggle for an image, or a struggle over imagery that is embedded in specific modes of production and reproduction. In its rigorous pursuit of the double meaning of representation in modernity, this remarkable book will inform not only our understanding of the rise and fall of the Popular Front in France in the 1930s, but also of the violently contested representations in today's society of the spectacle.' - Dr Neil Cox, University of Essex

'This fascinating and audacious study emphasizes complex interactions between parliamentary parties, the masses and the media. Tracing the Popular Front's rise and fall, it analyses the images that surrounded left-wing responses to the riot of 1934, the formation of a coalition government in May 1936, tensions resulting from the Spanish Civil War and the failed general strike of November 1938.' - Times Literary Supplement

'...this contribution to the study of political imagery will be welcomed by specialists on interwar France, not least for its suggestion of new sources and avenues for research.' - Jessica Wardhaugh, Modern and Contemporary France