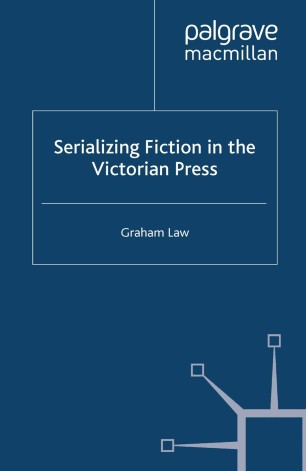 Serializing Fiction in the Victorian Press

Drawing on extensive archival research in both Britain and the United States, Serializing Fiction in the Victorian Press represents the first comprehensive study of the publication of instalment fiction in Victorian newspapers. Often overlooked, this phenomenon is shown to have exerted a crucial influence on the development of the fiction market in the last decades of the nineteenth century. A detailed description of the practice of syndication is followed by a wide-ranging discussion of its implications for readership, authorship, and fictional form.

'Serializing Fiction in the Victorian Press is an exemplary empirical study in the genre of History of the Book showing the influence of serialization on literary production and consumption, including the material effects on author, audience, and genre. Informed readers will be able to draw their own conclusions from Law's data on class and gender prejudice, and on commercial versus romantic versus professional theories of literary production.' - Professor Regenia Gagnier, School of English, University of Exeter

'As the first scholar to study in any detail this forgotten episode in the manufacture and distribution of a product designed for a mass fiction-reading public, Graham Law set himself a formidable task in Serializing Fiction in the Victorian Press.The raw materials necessary for a well-rounded account are both abundant and hard to find, and some have simply vanished...Yet enough data of various kinds have survived to enable Law to write a substantial and densely factual study, ballasted by a score of tables.' - Richard D. Altick, Regent's Professor of English, Emeritus, Ohio State University, 'The Curse of the Cliffhanger', Times Literary Supplement

'Serializing Fiction in the Victorian Press fufills our best expectations. It gives a detailed descriptive history of the rise and decline of syndication with a wide-ranging discussion of its implications for readers and authors. It will prove essential reading for those with an interest in this particular aspect of publishing history. The book is handsomely produced with sixteen, mostly uncommon illustrations. The notes are excellent with a comprehensive bibliography and index.' - Andrew Gasson, Author of Wilkie Collins: An Illustrated Guide (OUP, 1998) The Wilkie Collins Society Newsletter

'Serializing Fiction in the Victorian Press has irreversibly recast the shape of literary history in the nineteenth century...Law's book opens up for new scrutiny an important transitional period in the history of the novel and provides a wealth of new information about authors reaching audiences with serial fiction in the Victorian Age.' - Michael Lund, Professor of English at Longwood College, Virginia, co-author of The Victorian Serial (UP of Virginia, 1991), review in The Wilkie Collins Society Journal

'The first two chapters provide a comprehensive account of serialized fiction previous to 1850 and of the early newspaper serializers of the 1850s and 1860s (primarily in Scotland). Chapters three and four recount the history of Tillotson's Newspaper Fiction Bureau of Bolton, Lancashire, and its rivals, including the Northern Newspaper Syndicate, AP Watt's literary agency, and W.C. Leng and Co. of Sheffield, all of whom dominated the field during newspaper serialization's heyday from the 1870s to the early 1890s. Together, these chapters constitute the first cohesive, accurate history of how British newspaper syndicates developed and operated during this time.' - Chuck Johanningsmeier, University of Nebraska, Omaha, review in SHARP News

'Law's Serializing Fiction is an extremely readable and beautifully organized account of the serializing of fiction by newspaper syndicates toward the end of the nineteenth century...This is material history at its best, the careful and undogmatic unraveling of McLuhan's adage the medium is the message...' - Laura Mandell, Miami University, review in The Wordsworth Circle

'Law draws on a truly impressive range of primary sources to illuminate the practices of the syndicates, providing not only a history of the first and most important, Tillotsons, and its competitors, but also parallel stories of the careers in syndication of authors well-known (Mary Braddon, Wilkie Collins, Margaret Oliphant, Walter Besant) and vitually unknown (David Pae)...a valuable contribution to periodicals scholarship.' - Dallas Liddle, Augsburg College, review in