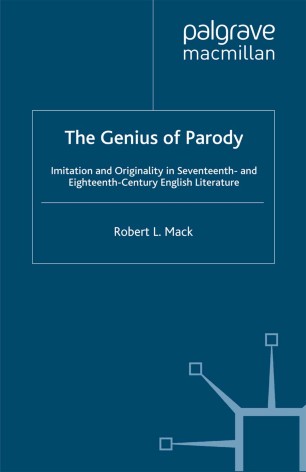 The Genius of Parody

Imitation and Originality in Seventeenth- and Eighteenth-Century English Literature

Recent theoretical approaches have compelled critics to rethink many received notions regarding the significance of contemporary parodic activity. This study places parody firmly (if paradoxically) where it belongs: at the centre of the literary-creative process in the literature of the Seventeenth and Eighteenth centuries.

ROBERT L. MACK is a Senior Lecturer in English at the University of Exeter, UK. He is the author of Thomas Gray: A Life, published in 2000.

'Robert L. Mack's The Genius of Parody makes an exciting contribution to the literary history of the Early Modern period and the eighteenth century. Mack provocatively asserts the centrality of parody in the writing of the period, and traces its operations in literature both familiar and unfamiliar. This is a stimulating, wide-ranging and ambitious book, written in a thoroughly engaging way that manages to combine an impressive range of scholarship with a lively manner of writing.' - Professor Simon Dentith, University of Gloucestershire, UK