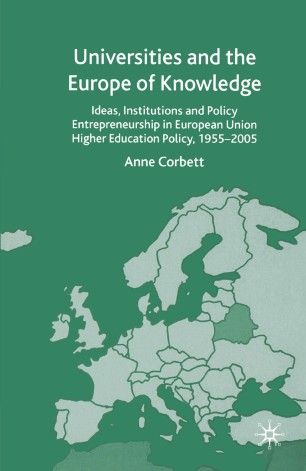 Universities and the Europe of Knowledge

This is a story of the EC at work over 50 years, seen from the perspective of a developing European higher education policy. The book provides a rich background narrative to current strategic efforts to develop the Europe of Knowledge, and to the Bologna Process. Its analytic interest in ideas and individual 'policy entrepreneurs' underpins the story and advances understanding of the EU policy process and of the phenomenon of policy entrepreneurship.

ANNE CORBETT has written extensively on education from France, as well as Britain, as a journalist. She is currently a Visiting Fellow at the Interdisciplinary Institute of Management of the London School of Economics and Political Science, UK, an associate of LSE's European Institute, deputy chairman of the Franco-British Council (British section) and active in the University Association for Contemporary European Studies. In 1996 she co-edited Education in France, Continuity and Change in the Mitterrand Years 1981-95 with Bob Moon. She was made an Officier de l'Ordre des Palmes Académiques by the French minister of education in January 2005 for work on university co-operation.

'This book fills a remarkable gap in our knowledge about the European Union and its policy on higher education. At the same time it offers a strong narrative of policy change, highlighting the role of individual entrepreneurship; a role that was both structured and structuring. On both aspects, it is a very welcome addition to the literature - indeed it is a fascinating read.' - Kevin Featherstone, Director, European Institute, and Professor of Contemporary Greek Studies, London School of Economics and Political Science, UK

'Anne Corbett has produced a rich and scholarly account, depending on both historical and political science methods, of how the EU succeeded in building up its role of leading a European dimension in higher education. In doing so, she well depicts the part played, sometimes manipulatively, by those she identifies as policy entrepreneurs in securing a position for the EU which many of us had not realised was on the agenda in its earlier years. This will stand as an authoritative account of a major development of European policy-making.' - Maurice Kogan, Professor of Government Emeritus, Brunel University, UK

'For years, the scholarship on European institutions treated states as billiard balls and the Commission as a black box. Anne Corbett carries forward a counter-tradition of scholarship by tracing in detail the process by which EU higher education policy emerged. By examining the process on a 50 year time scale, Corbett's book should satisfy both historical institutionalists and action-centered researchers, including those with only passing knowledge of the European project.' - Michael Barzelay, Reader in Public Management, London School of Economics and Political Science, UK

'The book is superbly written ..and reads at times almost like a thriller. But the great strength of Anne Corbett's research is that she constructs a highly persuasive political science account of policy-making in the EU...This most timely and excellent account by Anne Corbett is likely to take on increasing importance for policy researchers of higher education in the next few years, and there would be much value in using the methods and approaches of 'Universities and the Europe of Knowledge' as basis for wider policy and regulatory research.' - Roger King, Higher Education Digest

'The question whether Anne Corbett's work adds to what we already know can be answered with a concise and firm 'yes'. The author takes us ..on a fascinating journey through the past - based on a myriad of impressive interviews and comments.' - Jeroen Huisman, Studies in Higher Education

'...a welcome empirical analysis of policy change in the EU and a valuable contribution to the literatures of public policy and Europeanisation' - Nikolaos Zahariadis, West European Politics

'The information and arguments presented by Corbett will be of great interest to readers concerned with the story of European higher education policy, and to those interested in the nitty-gritty of EU policy-making in general.' - Roger Morgan, International Affairs

'Corbett's interview-based methodology gives personal life and character to an important part of the background to the current debate, and her emphasis on Brussels and its pecularities will provide helpful insights as the threads begin to be gathered together there over the next few years.' - Robert Jackson, Minister for Higher Education 1987-90, Times Higher Education Supplement

'I would recommend the book to both general and specialist academic readers and to postgraduates and third-year undergraduates who are studying higher education, policy-making or European integration.' - Penny Welch, Modern and Contemporary France