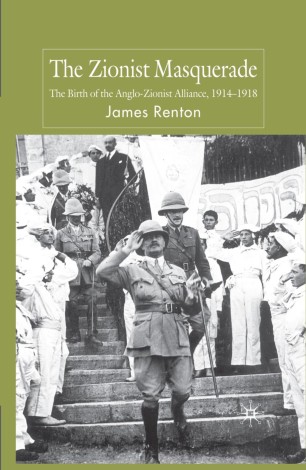 This book offers a new interpretation of a critical chapter in the history of the Zionist-Palestine conflict and the British Empire in the Middle East. It contends that the Balfour Declaration was one of many British propaganda policies during the World War I that were underpinned by misconceived notions of ethnicity, ethnic power and nationalism.

JAMES RENTON is Senior Lecturer in History at Edge Hill University, and an Honorary Research Fellow in the Department of Hebrew and Jewish Studies, University College London.

'This volume fits within the corpus of historiographical revisionism in Israeli-Palestinian studies, extending the long fingers of so-called new history back into the pre-mandate era...[It is] an elegant and convincing story of the birth of the Anglo-Zionist alliance, the iconic centre-piece of which has traditionally been regarded as the Balfour Declaration of November 1917...There is more to this book, however, than the re-evaluation of the Balfour Declaration. By concentrating closely on senior political figures, both British and Zionist, Renton brings the period to life...While the book undoubtedly adds to our understanding of the events preceding and immediately after the issuance of the Balfour Declaration...it has broader relevance for students of foreign policy in general, demonstrating the impact of cultural mindsets on policy-making. It is admirably researched and documented and adds new dimensions and chronological depth to the historiographical debates on Israel and Palestine thus far.' - Professor Emma Murphy, Asian Affairs

Balfour Declaration of 1917...Providing rational explanation for the irrational views of the individuals in London who were most involved, Renton provides a convincing account of why the British and the Zionists formed their wartime alliance. All this not only explains how the "masquerade" played out in 1918 but also anticipates some of the problems it caused for the British Mandate in Palestine and for Israel...[his] scholarship is impeccable...Finally, Renton deserves praise for putting scholarship ahead of partisanship, an all too rare achievement in the all too tortured historiography of the modern Middle East.' - Professor Roger Adelson, International Journal of Middle East Studies

'James Renton has written a powerfully argued and well-researched book that examines the progeny and impact of the Balfour Declaration of November 1917 and its mobilization of world Zionism. This is a fine piece of strongly evidence-based scholarship that will do much to provoke thought about British policies, the potency of propaganda, and the origins of the state of Israel.' -Professor Alan Dobson, Middle East Journal

'For over fifty years the purpose and significance of the Balfour Declaration have been hotly debated by historians, who have judged British motivation as primarily imperialist, a propaganda imperative, or, more recently, anti-Semitic. James Renton's re-examination of British policy toward the Zionist movement in the First World War, and the nature of the Anglo-Zionist alliance, offers a new lens through which to view the circumstances surrounding

"The word "masquerade" is not one to be used lightly be historians. Obviously, James renton is aware of this, and he strives to justify his choice of vocabulary by demonstrating that the Anglo-Zionist alliance was built on spurious foundations, with false pretences and hidden agendas present at all stages in its inception and early development...Renton admirably unravels the complex interplay of military events, diplomatic necessities, and masterly Zionist exploitation of the moving situation that led to...the so-called Balfour Declaration." - Professor Antoine Capet, H-Albion

'The merits of Renton's book are many. [...] [The book] is a very significant contribution to the existing discourse. [...] Renton's arguments are concise, lucid and well-substantiated. [...] The book as a whole can be highly recommended and deserves to attract wide attention.' - Oriental Archive