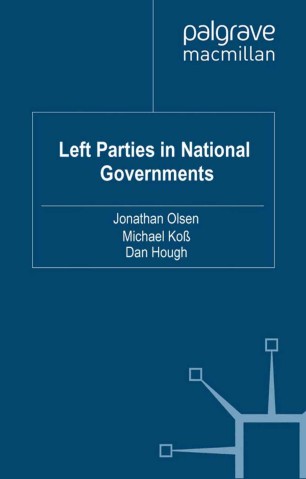 Analyzes why Left Parties enter national government, what they do when they get there and what effect this has on them. Alongside two comparative chapters, this book features detailed case-studies of European Left Parties in government.

'Political science's neglect of the (radical) Left since the end of the Cold War has been exceptionally short-sighted, ignoring the movement of many formerly marginal parties into the mainstream and increasingly into national government. This volume goes a considerable way towards redressing the balance. It is based on uniformly excellent contributions from a broad range of established and emerging scholars. These focus on the most significant European Left parties, the strategic choices open to them and the results of increasing participation in coalitions in an empirically-rich and theoretically-informed fashion. Overall, this intriguing volume demonstrates that although the Left remains an ideological party family, it is increasingly coalitionable and as pragmatic in its evaluation of governing possibilities as any other party family. The book demonstrates that the Left should be taken seriously, and is a must-read for any Party scholar.' - Luke March, Senior Lecturer in Soviet and Post-Soviet Politics, University of Edinburgh, UK