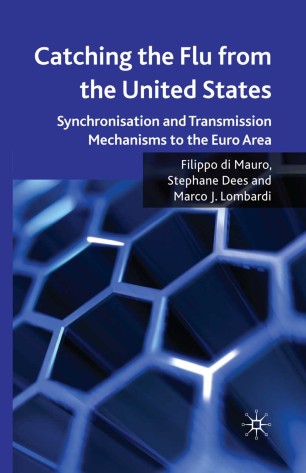 Catching the Flu from the United States

Synchronisation and Transmission Mechanisms to the Euro Area

Looking at historical cross-country interactions, this book examines the role of the US in the world economy. Illustrating that US shocks tend to have a global nature and that Monetary Union only partially shelters the Euro area from its external environment, the US should fully assume its responsibility, minimizing shock transmission.


FILIPPO DI MAURO is Head of the External Developments Division at the European Central Bank, Germany. His division is in charge of the international forecast, medium term FX analysis and the balance of payments of the Euro area. He started his career in 1984 at the Research Department of the Central Bank of Italy, following a short period of consulting at the OECD. Prior to joining the ECB, he also held various economist positions at the IMF and the Asian Development Bank.

STEPHANE DEES is Principal Economist in the External Developments Division at the European Central Bank, Germany. He earned his PhD in 1999 from the University of Bordeaux. He has previously worked for the National Institute for Economic and Social Research (NIESR) and the Centre d'Etudes Prospectives et d'Informations Internationales (CEPII). He has published in the Journal of Money, Credit, and Banking, Journal of Economic Dynamics and Control, Journal of Applied Econometrics, Economics - The Open-Access, Open-Assessment E-Journal, Economie Internationale, Economic Change and Restructuring, Economic Policy, Energy Journal, Energy Economics and Energy Policy.

MARCO LOMBARDI is an Economist in the External Developments Division at the European Central Bank, Germany. His tasks include monitoring and analysis of commodity markets and FX. Prior to joining the ECB, Marco has been Max Weber Fellow at the European Univeristy Institute and Assistant Professor at the University of Pisa.