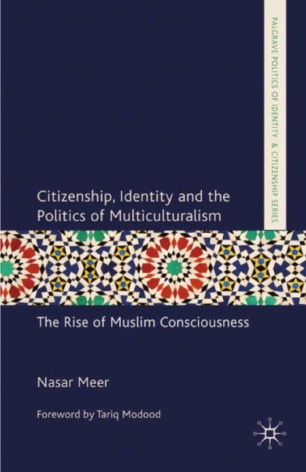 Citizenship, Identity and the Politics of Multiculturalism

The Rise of Muslim Consciousness

This book provides a fresh perspective on the emergence of public Muslim identities, traversing issues of Muslim-state engagement across government initiatives and church-state relations, across equalities agendas and the education system, the courts and the media.

NASAR MEER is Lecturer in Social and Political Sciences, University of Southampton, UK. He was previously a Visiting Fellow with the W.E.B. Du Bois Institute for African and African-American Studies, Harvard University, USA. He has recently been part of a country cross national inquiry into citizenship with the Centre for the Study of Ethnicity and Citizenship (Bristol, UK).

"Widely researched and lucidly organized and written, this book is a timely contribution to the study of Muslim engagement with education, media, and political activism in the United Kingdom. It focuses on current developments at the same time that it draws on legal and parliamentary history and on the theoretical insights of sociologists such as W.E.D. Du Bois. Nasar Meer advances innovative paradigms for anchoring Muslim identity in the dynamic religious life of twenty-first century Britain." - Professor Nabil Matar, University of Minnesota, USA

"Full of insights into the roots, nature, and impact of Muslim identities in Britain, this book sheds a bright light and offers fresh perspectives on issues of central concern today. Meers' subject is Britain, but his book has great value for helping to understand the dynamics of Muslim inclusion and exclusion in other countries as well. A most welcome contribution." - Nancy Foner, Distinguished Professor of Sociology, City University of New York, USA

"Important, timely and thought-provoking." - Journal of Ethnic and Migration Studies

"This is a refreshing and innovative account of the formation of different types of consciousness among Muslims in Britain and globally. Nasar Meer's lucid analysis of the complex processes at work is a timely reminder of the dangers of an over-simplified understanding of both Islam and Muslim communities. This is a book that deserves the widest possible readership." - John Solomos, Professor of Sociology, City University London, UK

"Nasar Meer's timely book makes an important contribution to current understandings of multiculturalism in Britain. He successfully deploys a critical application of the work of W.E.B Du Bois to theorise 'Muslim-consciousness' in relation to state funding of Muslim schools, race discrimination legislation and media representations of Muslim identity. The book uses Du Bois' notion of consciousness to articulate a nuanced understanding of British Muslim consciousness, distinguishing between a consciousness that exists 'in itself' and 'for itself', where the former is a socially imposed consciousness and the latter which is a product of self-mobilisation. Meer's work is both theoretically strong and empirically original." - Judith Squires, Professor of Political Theory, University of Bristol, UK

"This book should be recommended not only to scholars working on British Muslims but to all readers interested in the changing cultural borders of Europe." - The European Legacy: Towards New Paradigms

"One of the leading theoretically informed accounts of Muslim identity politics." - Contemporary Sociology

"Rich and intellectually stimulating." - Journal of Ethnic and Migration Studies

"There is little question that the theories put forward have significantly advanced the arguments for plurality, multiculturalism, and mutual understanding" - Nations and Nationalism