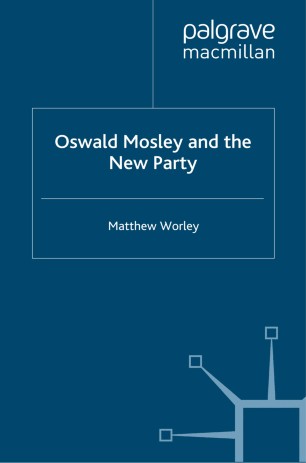 Oswald Mosley and the New Party

This is the first full-length study of the organization that incubated Britain's most provocative and successful fascist movement. Exploring Sir Oswald Mosley's secession from Labour, his evolving politics and his eventual embrace of fascism, this book examines the process by which he transformed from Labour politician to fascist.

Matthew Worley is Professor of Modern History at the University of Reading.

'Worley's book, which is the first detailed study of the New Party, is to be welcomed. It is important to show the danger that frustation with democratic systems can so easily lead to authoritarianism and militarism.' - Duncan Bowie, Chartist: For Democratic Socialism

'Matthew Worley's reconstruction of Oswald Mosley's New Party is a welcome addition to the historiography on inter-war British politics. Until now, no historian has studied the New Party on its own terms in this detail. The book is well written and it will appeal to undergraduate students because it serves as a good introduction to the fractious political culture that shaped the 1931 political crisis. But political historians should also read the book. Worley adds new flesh to the bones of a familiar story and he has used his intimate knowledge of the New Party to explore broader historical debates about the importance of 'generations' in this period and the relationship between fascism and modernism.' - Gary Love, Twentieth Century British History