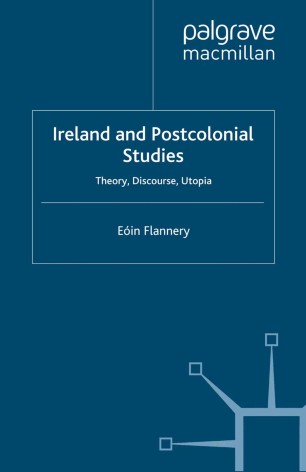 EÓIN FLANNERY is Senior Lecturer in English Literature at Oxford Brookes University, UK. His other publications include: Versions of Ireland: Empire, Modernity and Resistance in Irish Culture (2006); Enemies of Empire: New Perspectives on Imperialism, Literature and Historiography (2007); Ireland in Focus: Film, Photography and Popular Culture (2009); and This Side of Brightness: Essays on the Fiction of Colum McCann (2009).

'This outstanding book offers the first comprehensive survey of the postcolonial turn in literary and cultural studies. Not least of its merits is its clarity of exposition, using a chronological, thematic and authorial focus to untangle an often complex skein of intellectual positions. What is particularly impressive in Flannery's study is his capacity to show how even the smallest nuances in recent Irish critical debates may challenge not only Irish intellectual orthodoxies but also of some of the dominant paradigms in postcolonial theory. Flannery's intervention represents a considerable advance on the sterile revisionist/post-revisionist debate, or literary versus historical approaches to Irish culture, thus opening up new interdisciplinary vistas on the emergent critical field of Irish Studies.' - Luke Gibbons, Donald R. Keough Family Professor of Irish Studies, University of Notre Dame, USA

'Flannery asks trenchant and vexing questions about the relationship between postcolonial criticism as a practice and Irish literary studies as a politics - questions that illuminate the shared, contentious ground between the two and demand attention from students of the "post-colony" across the globe. Hardly exceptional, though deeply historically contingent, the case of Ireland is clearly a matrix for post/colonial modernities of all kinds. Beyond Erin, Flannery's thoughtful and canny readings of a host of major and minor players offer innovative and eminently portable exemplars of radical humanism's heuristic promise.' - Antoinette Burton, Professor of History and Bastian Professor of Global and Transnational Studies, University of Illinois, USA

'Eóin Flannery ably maps the introduction and gradual establishment of postcolonial studies as a mainstay in Irish critical life. [...] It is a solid volume - both thorough and well researched [...] This crticial genealogy will interest anyone with a concern for the theory, history, and cultural criticism of Ireland and other postcolonies.' - Melanie McMahon, Irish Studies Review