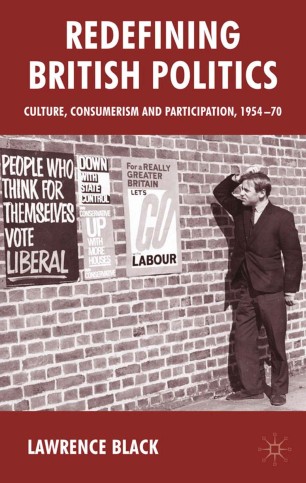 LAWRENCE BLACK teaches modern British history at Durham University, UK. His previous books include The Political Culture of the Left in Affluent Britain (2003) and the co-edited An Affluent Society? (2004) and Consumerism and the Co-operative Movement (2009)

'This is a superb, path-breaking study which offers a major re-evaluation of British political life in the 1950s and 1960s. It is challenging and innovative - powerful scholarship in every respect.' - Andrew Thorpe, University of Exeter

'Redefining British Politics changes the way we think about the meaning of the 'political' in Britain between the 1950s and the 1970s, taking it out of the narrow confines of Westminster and Whitehall and locating it in the wider culture of the everyday, whether in terms of shopping or television-watching. With a series of detailed studies of groups like the Consumers' Association and the Young Conservatives and individuals such as Mary Whitehouse and Arnold Wesker, Lawrence Black succeeds brilliantly both in demonstrating the importance of a rich and diverse political culture to post-war Britain and in making a claim for a new approach to political history. This is a major intervention in the history of twentieth-century Britain that demands the attention of all scholars and students of the period. It is beautifully researched, written with panache and humour and brimming with insight and provocation.' - Stephen Brooke, York University