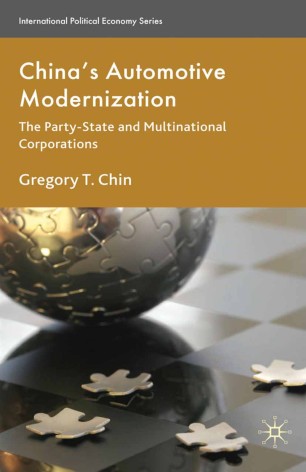 The Party-State and Multinational Corporations

As a window for understanding the relationship between globalization and the state's pursuit of national industrial development, this book examines how and why the Chinese government succeeded in leveraging China's international competitive advantages to modernize the country's automotive industry.

GREGORY T. CHIN is Assistant Professor in the Department of Political Science at York University, Toronto, Canada, and Senior Fellow of The Centre for International Governance Innovation, Canada. He served as a diplomat in the Canadian Embassy in Beijing, responsible for Canadian foreign aid to China and North Korea.

'In this carefully researched and richly detailed book focused on a sector that remains critical for the world economy, the reader peers deeply into the process through which China is rapidly rising as an industrial power. It depicts an unusually effective state achieving remarkable success in attracting and deploying staggering inflows of multinational corporate capital and technology. The conclusions the author draws about the resulting strengths and especially the vulnerabilities of contemporary China will stimulate vitally important debates among scholars, students, and policy-makers.' - Louis W. Pauly, Canada Research Chair in Globalization and Governance, University of Toronto, Canada

'Gregory Chin's excellent book on the political economy of the Chinese auto industry serves as a stark reminder that we should not underestimate the potential of the state to shape a nation's industrial trajectory, or to shape the strategies of seasoned multinationals. It has commonly been assumed that market forces prevail over state intervention. As an antidote, Chin's careful research and analysis illustrates how the Chinese state's nuanced strategy to actively channel markets has built an internationally powerful industry that may succeed in unseating the traditional global actors in this arena.' - Margaret M. Pearson, Professor of Chinese Politics, University of Maryland, USA