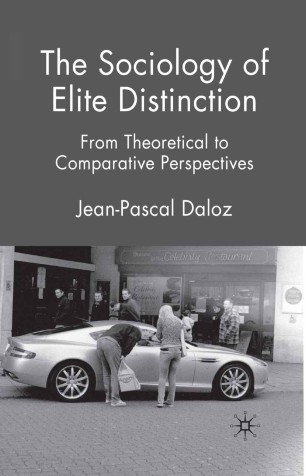 The Sociology of Elite Distinction

From Theoretical to Comparative Perspectives

This major new contribution to the study of consumption examines how dominant groups express and display their sense of superiority through material and aesthetic attributes, demonstrating that differences from one society to another, and across historical periods, challenge current understandings of elite distinction.

JEAN-PASCAL DALOZ Research Professor at the University of Strasbourg (CNRS/GSPE), France, and Senior Associate Member of the Maison Française and of the Department of Politics at the University of Oxford, UK. He is also President of the Research Committee on Comparative Sociology of the International Sociological Association. He has published 12 books to date, including the bestselling Africa Works: Disorder as Political Instrument (co-authored).

'Daloz identifies and challenges the simplifications and reductions that have marked sociological efforts to investigate the symbolic displays of classes and elites. In his often witty, encyclopaedic exploration of the fantastic variations that actually have marked such displays, he gives the culture of distinction not only an autonomy but an internal structure - for the first time.' - Jeffrey C. Alexander, Professor of Sociology, Yale University, USA

'Thanks to its comparative approach and its concern for varieties of social behaviour, this analysis of social distinction by Jean-Pascal Daloz helps us to go beyond Bourdieu's famous study, published thirty years ago.' - Peter Burke, Professor of Cultural History, University of Cambridge, UK

'This ambitious book fills a yawning gap in the social scientific literature and will appeal to a readership across the social sciences.' - Alan Warde, Professor of Sociology, University of Manchester, UK

'The Sociology of Elite Distinction is one of those rare books that pulls a mass of ideas and evidence together in a way that alternately puts old ideas in a new light and stimulates new ones along the way. Daloz thinks like a historian and writes like a sociologist...What Daloz has done is to break down the walls of universal models to give us a glimpse of the fascinating and diverse landscape of distinction.' - The Journal of Consumer Culture

'The Sociology of Elite Distinction is a superb, balanced and critical synthesis of the major theoretical and comparative works that deal with elite distinction...Daloz's book fills a gap in the literature on elites.' - International Political Anthropology

'This is an inspiring book about elite forms of distinction...Daloz provides sociologists working on ruling classes and elites with a multitude of research tools to help in future research.' - Cultural Sociology

'The contribution this book makes is in offering readers a clear, comprehensive and thorough introduction to the study of social distinction by elite groups. Through his approach to existing theory, we have the tools to enter into the realm of the interpretation of meaning and the analysis of the legitimacy of symbols in a manner that can generate new avenues for research and strengthen sociological fieldwork on elite.' - International Sociology

'Daloz's book is a most interesting contribution to the sociology of consumption for it draws attention to the perspective of elitist distinction which has been little explored by social scientists, despite its great importance.' -Politica y Sociedad

'Daloz displays an intimidating knowledge of settings from antiquity to the present. He compares how elites in these myriad settings have used ostentation or austerity to demonstrate distinctiveness. The book is a tour de force in the sociology of elites and the mechanisms used to sustain their prominence.' - Winterthur Portfolio

'A strength of Daloz's book lies within the richness of the empirical examples he offers: the reader experiences several revelations that indicate her/his own ignorance. It is also refreshing that Daloz does not commit to a single theoretical tradition.' - Sosiologia

'A thorough investigation of distinction was overdue, and Daloz's insightful and engaging work is a welcome contribution to the literature. Daloz's book is a good first step, and for that it merits distinction.' Acta Sociologica