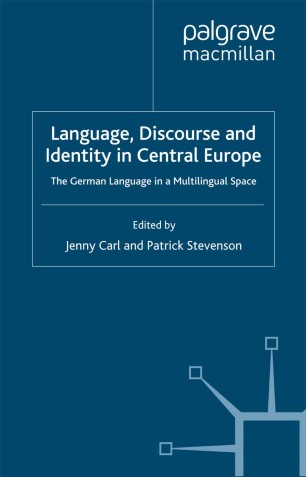 The German Language in a Multilingual Space

Part of the Language and Globalization book series (LAGL)

Central Europe has always been a highly multilingual region but how has this been affected by the social and political transformations of the last 20 years? The German language in particular has long played a key role in processes of identification here: but what role is the relationship between German and other languages playing today in the reshaping of societies and communities in this rapidly changing region? How is this relationship articulated in discourses on language and language ideologies? How is it manifested in individual repertoires and social practices? How is it determined by social and cultural policies? How is it exploited in the construction of European identities? These are just some of the questions addressed in this book, in which individual studies explore language practices in the multilingual contact zones of central Europe and the impact of both past and present migrations. Analysing a wide range of sources from media texts to language biographies and from business meetings to salsa classes, the authors demonstrate the local effects of global processes and some of the many ways in which language figures in contemporary social change.

'The linguistic landscape of Central Europe in the nineteenth and twentieth centuries consists of a complex web of protecting and oppressing minority languages, creating and abolishing nation states and national languages, and shifting political and linguistic borders and boundaries to expand some territories and to render invisible others. This fascinating volumes contains some 12 chapters each dealing with case studies on the use of language(s) in the creation of community and individual identity, drawing on evidence from language contact situations which go beyond the typical textbook accounts of, say, German linguistic enclaves in Hungary. Instead, studies of new areas such as the use of German as a foreign language in Poland, German immigrant literature in Romania and German theatre in Poland, as well as the language of business communication in international companies in the Czech Republic, provide a real advancement for our understanding of multinational space(s). At a time when Europe is still dominated by the tension between monolingual nation states and a recent openness and acceptance that minority and regional communities (and their languages) deserve proper recognition, including e.g. the drive to a greater EU whilst at the same time strengthening (or even creating) regions, this book offers genuine insights into the complexities of the political, cultural, and educational importance of language for the identity of the citizens of Central Europe. This book shows a deep understanding of the historical issues, covers a broad range of case studies from leading European researchers, and addresses the questions of today by offering answers which will still be important tomorrow.' - Nils Langer, Reader in German Linguistics, University of Bristol, UK

'This impressively wide-ranging and well-informed study presents up-to-date perspectives on matters of significance not only for linguists...but also for scholars with a more general interest in multilingual policy in the European Union.' - Slovo A Slovesnost, Czech Republic