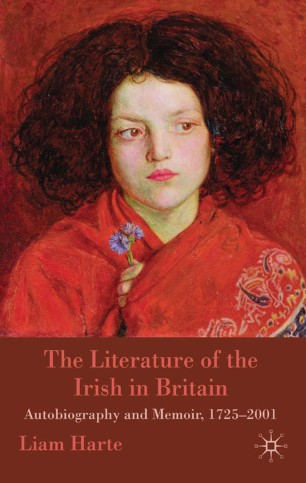 The Literature of the Irish in Britain

The first critical survey of an unjustly neglected body of literature: the autobiographies and memoirs of writers of Irish birth or background who lived and worked in Britain between 1725 and the present day. It offers a stimulating and provocative introduction to the themes, preoccupations and narrative strategies of a diverse range of writers.

LIAM HARTE teaches Irish and Modern Literature at the University of Manchester, UK. He has published widely on contemporary Irish fiction and was Armstrong Visiting Professor at the University of Toronto in 2008. His recent books include Modern Irish Autobiography: Self, Nation and Society (Palgrave Macmillan, 2007) and Ireland Beyond Boundaries: Mapping Irish Studies in the Twenty-First Century (2007, co-edited with Yvonne Whelan).

'The Literature of the Irish in Britain is an invaluable work of reclamation, doing scholarly justice to the large body of writing by Irish men and women who emigrated to the neighbouring island over the centuries. It offers a coherent context for a set of voices which were often previously hidden and forgotten. Liam Harte brings to this work a sympathy, an acute intelligence and considerable knowledge. It is a work of ingenious discovery and rediscovery which gives due attention to a past which, on both sides of the Irish Sea, has been consistently undervalued. In their variety and their eloquence, the fascinating autobiographical pieces gathered in this book will change the way we view the history of Irish emigration.'

'...a fascinating anthology of historical tales...The book challenges preconceived views about the Irish in Britain and illustrates a more diverse and multi-layered culture that has often been misplaced or forgotten.' - Elaine Sheridan, Irish Post

'Liam Harte's superb anthology of first-person narratives...is a rare book, a real act of discovery that overturns inherited perceptions and opens up a rich terrain of Irish experience...Harte undermines the whole notion of 'the Irish in Britain' as a single entity and restores the complicating factors of class, gender, religion and geography. Above all, he restores in his wonderful book the individuality of each one of the millions of painful, hopeful journeys across the Irish Sea.' - Fintan O'Toole, Irish Times

'Liam Harte has collated a brilliant, valuable piece of work. If the departing Irish, particularly those who went to Britain, were said to have gone off into silence, Harte has set about breaking that silence with great gusto. Harte has delved deeply but not indiscriminately. If there is to be a better collection in years to come this will still remain the template. It will appeal of course to the academic audience who deal in these things but I can only hope that it will reach a wider audience too. A tremendous book.' - Books Ireland

'Harte's achievement in putting together this anthology is all the more impressive given that he has made this subject of Irish migrant autobiography more or less his own. Historians and other scholars have consulted many of the published works and some of the unpublished accounts that he includes, but without the critical dimension and sharp insights that he brings to the study of this literature. By drawing our attention to these neglected autobiographies and memoirs, he also reminds us that the canon of Irish literature should be expanded to include the lesser known autobiographical work of migrants. In doing so, he has opened up new ways of looking at the Irish diaspora by seeking to recover how people made sense of their exile, dislocation and displacement. In restoring human experience to the centre of the story of Irish emigration, this volume will encourage others to seek out personal accounts of what it means for individuals to be Irish, either at home, abroad or some indeterminate place between these worlds.' Enda Delaney, Dublin Review of Books

'Liam Harte's The Literature of the Irish in Britain: Autobiography and Memoir is a major contribution to understanding this community. Those working in any area of modern Irish history or culture will find things to enthrall them.' Conor Carville, Times Higher Education

'A wide range of very different kinds of writing is superbly anthologized by Liam Harte in his The Literature of the Irish in Britain: Autobiography and Memoir, 1725-2001, where the exile memories of W.B. Yeats and Elizabeth Bowen combine with the reclaimed voices of forgotten or previously unpublished Irish navvies, journalists and nurses to create a marvellous palimpsest of immigrant experience. It also provides an implicit commentary on the relationship of Irish consciousness to the English language.' - Roy Foster, TLS Books of the Year 2009

'I was profoundly touched The Literature of the Irish in Britain: Autobiography and Memoir, 1725 2001 by Liam Harte, a rich pot-pourri of the Irish diaspora experience, from merry nurses to swashbuckling pickpockets, lonely poets to passionate Home Rule parliamentarians. A gem.'

'The scope of this book is ambitious in every sense ... In his inclusion of sixty-three autobiographers Harte must surely be considered to have provided an admirable first mapping of this uncharted territory. The introduction to this critical survey is a feast for anyone interested in the topic, providing a rare engagement with autobiographical theory within an Irish context ... Throughout the body of the text, the diligence of Harte's research is in evidence ... The book makes a valuable contribution to an under-researched area, including relevant aspects for those working across the areas of modern Irish and indeed British literature, history and culture.'

'One of the most valuable services the book provides is to problematize the common perception of the Irish in Britain as predominantly victims of exile. The rich heterogeneity of the narratives exemplifies what Harte refers to as the 'multiple ways' in which migrants reflected on their experience and, as a result, their sense of Irishness ... Liam Harte has clearly taken great pains to be as representative as possible. He should be congratulated for producing such a meticulously researched volume and bringing a fascinating and unduly marginalised genre of Irish literature firmly to our attention.'

'Even in an era of academic work dedicated to the reclamation of marginalised and subaltern voices, those Irish immigrants themselves have remained largely inaudible. Liam Harte's work has for many years been centrally important in addressing that silence, and his handsomely-presented new book is another tremendously valuable contribution to that.... Harte has managed to include in this portable volume an enormous quantity of fascinating and valuable material. It is a major work of scholarship and goes a long way to restoring complexity to perceptions of the Irish in Britain that, over many centuries, have been unjustly simplified.'