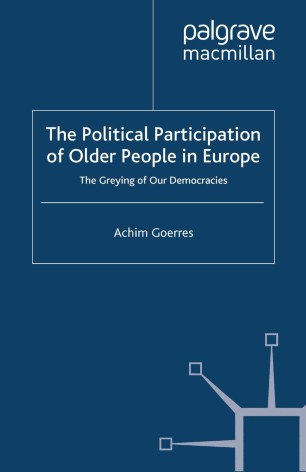 The Political Participation of Older People in Europe

The Greying of our Democracies

The first comparative analysis of the political behaviour of older people, using evidence from 20+ European democracies. In contrast to younger people across European societies, older people do not behave uniformly. For political participation in later life, it matters where and when individuals have grown up and in which country they become old.

ACHIM GOERRES has been Assistant Professor in the Faculty of Management, Economics and Social Sciences at the University of Cologne, Germany since 2008. After completing his PhD at the LSE, he was a postdoctoral research fellow at the Max Planck Institute for the Study of Societies before moving to the University of Cologne. His research interests include the comparative politics of ageing societies, comparative political behaviour and applied research methods.

'Achim Goerres has written the most important new book on the political participation of old and young in a generation. With sophisticated and nuanced analyses of cross-national, cross-time data, he overturns one conventional wisdom after another about the political impact of aging populations. This is a must-read for scholars and policymakers alike.' - Andrea Louise Campbell, Associate Professor of Political Science, Massachusetts Institute of Technology, USA

'Retired majorities will gather at the gates of liberal democracies shortly. With impressive empirical arguments Achim Goerres dissects the trendy fears for harsh generational battles between politically organized pensioners and uninvolved youngsters. Amid an ocean of research on youth political behaviour his appeal for a 'political gerontology' is very timely, revealing and thoroughly documented. The apocalypse of greying democracies is not near, but age differences in political participation urgently call for empirical evidence so skilfully presented here.' - Jan van Deth, Professor of Political Science and International Comparative Social Research, University of Mannheim, Germany

'Age related differences in political participation are becoming more and more significant over time, so Achim Goerres examines an issue of growing importance to social scientists in general and political scientists in particular in this book. He makes an important contribution to our understanding of the participation of older people and their impact on the political process and on political outcomes.' - Paul F. Whiteley, Professor of Government, University of Essex, UK