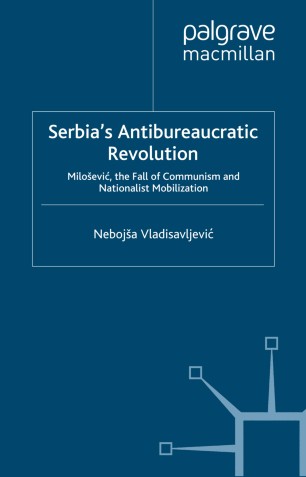 Milošević, the Fall of Communism and Nationalist Mobilization

The antibureaucratic revolution was the most crucial episode of Yugoslav conflicts after Tito. Drawing on primary sources and cutting-edge research, this book explains how popular unrest contributed to the fall of communism and the rise of a new form of authoritarianism, competing nationalisms and the break-up of Yugoslavia.

NEBOJŠA VLADISAVLJEVI? is LSE Fellow in Government at the London School of Economics and Political Science, UK. He teaches comparative politics and the regulation of ethnonational conflict in the Graduate School.

'This is an exceptionally original contribution to scholarship of the former Yugoslavia. Focusing on a crucial period of grassroots mobilizations in Serbia, Kosovo, Vojvodina and Montenegro during the second half of the 1980s, Vladisavljevic shows how these struggles and the interactions between regime elites and the masses they engendered shaped the dramatic events of the 1990s and beyond. He situates his fascinating empirical findings in the context of comparative politics literatures on regime change and social movements, and shows that the descent into divisive nationalisms was at least as much the outcome as the cause of political protest and elite-mass interactions. An outstanding work that will interest both regional specialists and scholars of comparative politics.' - Sumantra Bose, Professor of International and Comparative Politics, London School of Economics, UK

'This is a timely and ground-breaking piece of work which revisits one of the key developments that took place twenty years ago in the 'former' Socialist Federative Republic of Yugoslavia and led to the break-up of that country...Vladisavljevic takes a completely fresh approach to this topic and sheds new light upon it.' Robert Hudson, Reader in Contemporary History and Cultural Politics, University of Derby, UK

'This book should be in the library of anyone interested in nationalism, dictatorships, peacekeeping forces, the Balkans, and the power of the people.' - Michael Mahoney, Europe-Asia Studies

'Vladisavljevic's is a timely revisionist account of a crucial aspects of 1980s Yugoslav history. Through a balanced scholarly approach, the study places Milosevic's rise to power in a novel context.' - Mladen Tosic, Nations and Nationalism

'Vladisavljevic challenges nearly every aspect of previous accounts of Slobodan Milosevic's rise to power in 1986-87 and of the nationalist mobilization of 1988-89...It is a stimulating argument and doubtless one that will stimulate argument.' - Robert Legvold, Foreign Affairs Magazine

'...a powerful reminder that ordinary people can accomplish extraordinary things...[it] contradicts the current historical record of Milosevic's rise to power and the ensuing nationalism. Indeed Vladisavljevic's bottom-up perspective redeems the voice and agency of the non-elite, rejecting accounts that cast them as mere puppets. That he is able to do so with such theoretical and empirical sophistication makes the argument all the more compelling and an enjoyable read.' - Mobilization

'This book is a valuable contribution to the scholarly literature on the former Yugoslavia, the fall of communism, regime change and nationalist mobilisation.' - Political Studies Review