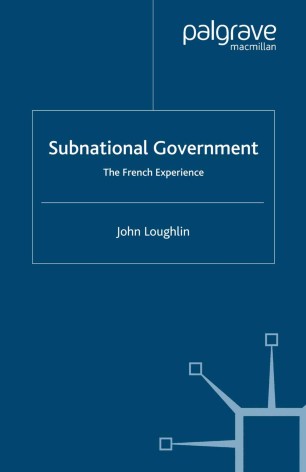 With globalization and the EU, local and regional government in member states have experienced dramatic changes in their operation, responsibilities and organizations. Loughlin presents an overview of the theory and practice of subnational government in France and a detailed examination of the outcomes.

JOHN LOUGHLIN is Professor of European Politics and formerly Jean Monnet Professor at Cardiff University, UK, and European Studies Visiting Fellow at St Antony's College, Oxford, UK. Previously he held positions at the Erasmus University Rotterdam and the University of Ulster. He has held Visiting Professorships and Fellowships at Merton College, Oxford, the Institutes of Political Science in Paris, Bordeaux and Aix-en-Provence, the European University Institute, Florence, the Royal Flemish Academy of Belgium for Arts and Sciences, the Free University of Brussels and the University of Umeå, Sweden. He is currently an Expert on Regional and Local Democracy of the Council of Europe and at UN-HABITAT.

'Professor John Loughlin has written yet another very informative book in which he combines his insights into culture, religion and history with knowledge about contemporary political developments at national and sub-national levels. [...] accessible not only for the specialist but also for the new student of French territorial politics.' - Anders Lidström, Professor of Political Science, Umeå University, Sweden

'The author convincingly presents the French experience of decentralisation as an example of major transformations all western welfare states have been subject to. This book can be highly recommended to those interested in French territorial politics and subnational government. However, it includes more than a country study. Readers interested in the development of the modern state and in comparative local government and politics will profit from it.' - Arthur Benz, Professor of Political Science, University of Hagen, Germany

'The book is a much needed contribution to the theoretical debates on territorial governance because many academics and experts on territorial politics have tended to neglect the French case as being simply an exception in the general rule of multi-level governance in advanced Western democracies. John Loughlin magisterially clarifies how mistaken is this preconception and indicates those analytical areas where more attention should be paid in the future. This volume should become indispensable for courses in French politics and will be read with profit by anyone interested in comparative studies of regionalism and reform of the state in Europe.' - Luis Moreno, West European Politics

'Loughlin clearly demonstrates significant scholarship in this area and manages to turn what might be considered dry material into something very pleasant and easy to read.' - Karen West, Public Administration