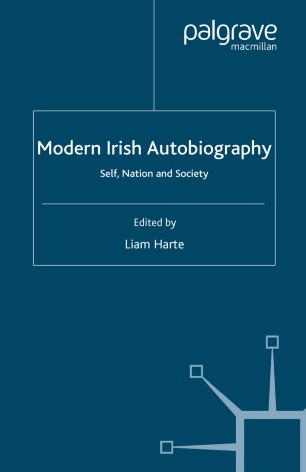 Self, Nation and Society

Modern Irish Autobiography provides the first comprehensive critical analysis of the Irish autobiographical tradition from the early nineteenth century to the present day. This pioneering collection offers readers a stimulating and provocative introduction to the principal themes, modes and narrative strategies of Irish autobiographers.

'Each of these writers explores the possibility that autobiography in Ireland may in some sense also be the autobiography of Ireland. The result is a set of meditations which does justice to many different Irelands, at home and overseas, in Irish and English, of the past and of the present. Liam Harte has assembled a strong team which shows how the making of Irish people is always a work-in-progress' - Professor Declan Kiberd, Chair of Anglo-Irish Literature and Drama, University College Dublin, Ireland

'The autobiographical genre has been accentuated of late in Ireland as people begin to explore the territory between official narratives and their own experiences. With originality and insight, the essays in this collection broach the process of mapping a history of Irish self-writing. Theoretically engaged and critically astute throughout, Modern Irish Autobiography puts the I into Ireland, establishing self-writing as central to the project of modern Irish Studies.' - Dr Gerry Smyth, Liverpool John Moores University, UK