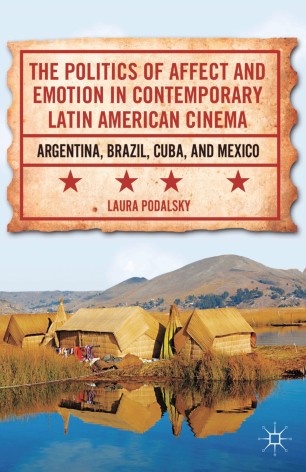 The Politics of Affect and Emotion in Contemporary Latin American Cinema

This book explores the role of emotion and affect in recent Latin American cinema (1990s-2000s) in the context of larger public debates about past traumas and current anxieties. To address this topic, it examines some of the most significant trends in contemporary Latin American filmmaking.

LAURA PODALSKY Associate Professor in the Department of Spanish and Portuguese at Ohio State University, USA.

"This well-theorized, well-researched volume is a 'mapping project' that explores the ways in which aesthetics and politics intersect in the contemporary cinema of Latin America. Specifically, Podalsky (Ohio State) examines the important but understudied question of the emotional appeal and sensorial appeal of recent Latin American fiction and nonfiction films and the relation of those appeals to key sociopolitical issues and phenomena - for example, youth and their anxieties, the rise of neoliberal economic policies and consumerism, and the politics of memory in Southern Cone countries recently ruled by authoritarian military dictatorships. Specific topics examined include the influence of traditions of Mexican tabloid journalism on the artistry of Señorita extraviada (2001); the political-thriller genre as a way to stimulate reconsideration of a nation's recent dictatorial past; and the use of affect and emotion in The Jackal of Nahueltoro to criticize an unjust, uncaring Chilean society. Podalsky's analyses of individual films - e.g., Babel and Picado fino - are insightful, original, and frequently provocative. A useful, thorough scholarly apparatus is provided. The volume is carefully edited and produced... Summing Up: Recommended. Graduate students, researchers, faculty." - D. West, emeritus, University of Idaho, CHOICE

"In this rich and engaging work, Laura Podalsky explores the sensorial and emotional appeals of recent Latin American films and offers an alternate account of their contemporary social and political significance. Drawing on studies of feeling from a variety of disciplines, The Politics of Affect and Emotion in Contemporary Latin American Cinema also goes beyond notions of "national" or "Third" cinemas to engage in expansive and productive dialogue about filmmaking within global, transnational, and pan-regional trends. This dynamic, interdisciplinary study skillfully accounts for the range and complexity of Latin American films to show how they are neither resistant to nor complicit with contemporary media culture, but rather how they offer an emotionally-charged reflection on the legacies of Third Cinema and authoritarian political regimes, emergent consumer culture and youth culture, and the poetics and politics of memory today." - Patrice Petro, author of Aftershocks of the New: Feminism and Film History

"In this compelling study, Podalsky reveals the ways in which films from and about Latin America evoke and employ emotion so as to engage with contemporary socio-political discourse. By jettisoning dichotomies - global and national paradigms, popular and critical reception, high and mass culture - the author forges a new critical approach, one highly appropriate for this era of connectedness and interdependence." - Ann Marie Stock, author of On Location in Cuba: Street Filmmaking during Times of Transition and editor of Framing Latin American Cinema: Contemporary Critical Perspectives