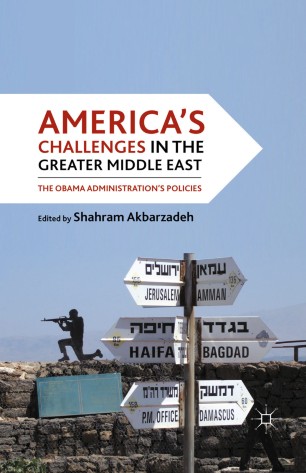 Barack Obama has faced many challenges in reversing U.S. policy on the Middle East. This book highlights points of resistance to Obama's efforts regarding U.S. foreign policy and what lessons may be learned from this experience for the remainder of his presidency and his potential second term in office.

Shahram Akbarzadeh is Professor of Asian Politics (Middle East & Central Asia) and Deputy Director of the National Centre of Excellence for Islamic Studies at the University of Melbourne, Australia. Luca Anceschi is Lecturer in International Relations in the School of Social Sciences, La Trobe University and Research Associate at the LTU Centre for Dialogue. Charles W. Dunne is a scholar with the Middle East Institute in Washington, D.C. Michele Dunne is a senior associate at the Carnegie Endowment for International Peace and editor of the online journal, the Arab Reform Bulletin. Touqir Hussain is a former senior diplomat from Pakistan who has served as Ambassador to Japan, Spain, and Brazil. He also held senior positions in the Pakistani Foreign Office. Christian Koch is the Director of International Studies at the Gulf Research Center located in Dubai, UAE. Thomas W. Lippman, former Middle East bureau chief of The Washington Post, is an adjunct senior fellow of the Council on Foreign Relations and an adjunct scholar at the Middle East Institute. William Maley assumed the position of Foundation Director of the Asia-Pacific College of Diplomacy at the Australian National University in 2003. Ken Menkhaus is Professor of Political Science at Davidson College, where he has taught since 1991. Beverley Milton-Edwards is Professor of Politics in the School of Politics, International Studies and Philosophy at Queen's University Belfast, Northern Ireland. Paul A. Williams is Assistant Professor in the Department of International Relations at Bilkent University in Ankara, Turkey. Yahia H. Zoubir is Professor of International Studies, and Director of Research in Geopolitics at Euromed Management, Marseille School of Management.

'This engaging, ambitious and sometimes disturbing volume brings home the complexity of the challenges the United States faces as it tries to define and promote US interests amidst the ambiguity and contradictory pressures of the Middle East . . . Compelling reading.'

'The experts collected here appraise U.S. policy toward the vast array of countries from the Maghreb to Afghanistan, covering essentially the first two years of Barack Obama's presidency and comparing his performance and policies with those of his predecessor. More comprehensive than most such works, the book includes the often overlooked Central Asian states and Somalia.'

'In Akbarzadeh's compilation, the United States' strategic relationships in the Middle East are evaluated in light of recent events, from the beginning of Obama's presidency to the revolutions which characterized the 2011 Arab Spring. The articles bring together a wide range of scholars who write about subjects as diverse as the challenges confronting the Obama Administration in Afghanistan, the risk of the US losing its moral appeal in Central Asia, and the decisions the US must make in supporting Egypt's transition to democracy.'

'This insightful overview of the U.S. struggle to redefine its position in the Middle East after the end of the Cold War shows that a new coherent policy is still work in progress at best.'