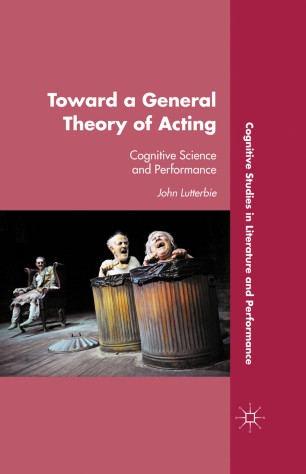 Toward a General Theory of Acting

Toward a General Theory of Acting explores the actor's art through the lens of Dynamic Systems Theory and recent findings in the Cognitive Sciences. An analysis of different theories of acting in the West from Stanislavski to Lecoq is followed by an in depth discussion of technique, improvisation, and creating a score. In the final chapter, the focus shifts to how these three are interwoven when the actor steps in front of an audience, whether performing realist, non-realist, or postdramatic theatre. Far from using the sciences to reduce acting to a formula, Lutterbie celebrates the mystery of the creative process.

John Lutterbie is a Professor at Stony Brook University, USA.

"A delight . . . Throughout his book, Lutterbie manages to keep a delicate balance between explaining how the model and insights from cognitive science illuminate acting and its processes without being reductive, and articulating how and why that model or a particular insight is relevant to a new understanding of acting and its processes. This is an actor/reader friendly book that should be required reading for all actors and teachers of acting." - The Drama Review

"An acting book that is both valuable and informative . . . a plethora of insights. [Toward a General Theory of Acting is] a kind of tour guide through the confusing world of acting methodologies - and it should find a home on the bookshelves of serious actors and acting teachers." - New York Journal of Books

"In this addition to the 'Cognitive Studies in Literature and Performance' series, Lutterbie deconstructs the craft of acting using dynamic systems theory. . . His assertion that the actor is a dynamic system from which craft and art emanate convinces. Summing Up: Recommended. Graduate students through professionals." - Choice

"Clearly written and compellingly argued, Toward a General Theory of Acting should become standard reading for actors and scholars alike. Lutterbie weaves together threads of thinking from disparate schools of acting (from Strasberg and Meisner to Bogart and Lecoq) and scholarly disciplines to provide the reader with an integrated understanding of the art and science of acting. He cogently explains the research in cognitive science and beautifully demonstrates its importance to acting. Dynamic systems theory illuminates the complexity of the actor's work and could radically shift how performance is studied." - Amy Cook, Associate Professor, Indiana University and author of Shakespearean Neuroplay: Reinvigorating the Study of Dramatic Text and Performance through Cognitive Science