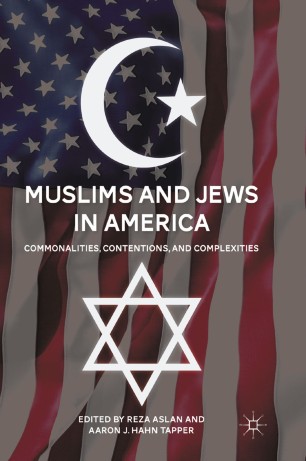 Muslims and Jews in America

This book is an exploration of contemporary Jewish-Muslim relations in the United States and the distinct ways in which these two communities interact with one another in the American context. Each essay discusses a different episode from the recent twentieth and current twenty-first century American milieu that links these two groups together.

DR.REZA ASLAN Internationally acclaimed writer and scholar of Middle Eastern Studies, is a fellow at the University of Southern California's Centre on Public Diplomacy and Middle East Analyst for CBS News.

DR.AARON J. HAHN TAPPER Founder and Co-Executive Director of Abraham's Vision and an Assistant Professor in the Theology and Religious Studies Department of the University of San Francisco, USA, holding the Swig Chair of Judaic Studies, and he is also the founding Director of the Swig Program in Jewish Studies and Social Justice, the first academic program in the country formally linking these two fields.

"What has transpired in the last fifteen years vis-à-vis Jewish-Muslim relations among American actors has been groundbreaking and naturally wrought with significant tension and missteps, but also growth, as evidenced by the two speeches included in the volume by Dr. Ingrid Mattson and Rabbi Eric Yoffie. The collection of essays speaks to how far both communities have come within America and how far the communities need to advance. It is critical that the discourse on such a topic reflect the realities happening in American neighborhoods today. Because not a single book published - as far as I know - on Jewish-Muslim relations focuses on such tensions in American cities and how these tensions are perceived by their respective communities through the prism of nightly news or the sermons delivered on Friday or Saturday, this book will be breaking new ground, both for academics and activists." - al-Husein N. Madhany, Advisor to Patheos.com and Senior Fellow, Homeland Security Policy Institute, George Washington University"The sophistication and acuity of the penetrating essays in this volume usher in a new era of maturity in Jewish-Muslim dialogue in America. While focusing on our common interests, the articles confront head-on the seemingly intractable differences that divide us. Muslims and Jews in America offers hope for the future of these two major American religions." - Rabbi Burton L. Visotzky, Appleman Professor of Midrash and Interreligious Studies and Director, Louis Finkelstein Institute for Religious and Social Studies, Jewish Theological Seminary, and author of Sage Tales"This is a terrific book - helpful and hopeful and healing - written by Muslims and Jews who care about each other and care about America. They show that they have more in common with each other than what divides them, and their positive and realistic approach to interfaith relations should be a model for peace in the Middle East." - Mark Juergensmeyer, author of Terror in the Mind of God: The Global Rise of Religious Violence