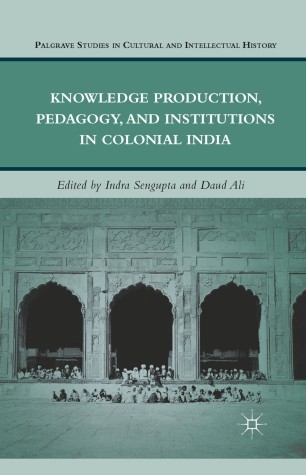 INDRA SENGUPTA is a Research Fellow in British Empire and Commonwealth History at the German Historical Institute London, UK. Her research interests include the production of knowledge on India in colonial India and Europe, especially German Orientalism, and monument-making practices in colonial India. Her current research is on monument-making in colonial India in colonial and metropolitan perspectives. She is the author of From Salon to Discipline: State, University and Indology in Germany, 1821–1914 (Heidelberg, 2005), has edited a special issue called Memory, History, and Colonialism: Engaging with Pierre Nora in Colonial and Postcolonial Contexts, Bulletin of the German Historical Institute London, Supplement 1 (2009).

DAUD ALI is Senior Lecturer in Indian History at the School of Oriental and African Studies (SOAS), University of London, UK. His area of specialization is early medieval Indian history (c. 300-1200 CE). He has published articles on courtly and monastic discipline in early India, conventions in erotic poetry and courtship, domestic slavery in medieval south India, and conceptions of space and time in imperial Chola inscriptions. He is author of Courtly Culture and Political Life in Early Medieval India (Cambridge, 2004); he has also co-authored, with Ronald Inden and Jonathan Walters, Querying the Medieval: Texts and the History of Practice in South Asia (Oxford, 2000), and edited Invoking the Past: the Uses of History in South Asia (Oxford, 1999).

“Knowledge Production, Pedagogy, and Institutions in Colonial India, edited by Sengupta and Ali, belongs to a body of literature that attempts to provide scholarly understandings of colonial societies and imperial history through the lens of colonial knowledge. … Knowledge Production, Pedagogy, and Institutions in Colonial India makes for a compelling reading for imperial historians, anthropologists, literary scholars, scholars of gender, and other scholars and students for whom the Saidian analytical framework has a special appeal.” (Nasir M. Baba, Alberta Journal of Educational Research, Vol. 61 (1), Spring, 2015)

"This is a very timely collection. The issue of colonial knowledge has been at the forefront of the study of South Asia for more than a decade. However, the paradigms originally informing it have become increasingly frayed, and the debates surrounding it ever more tired. This book offers to re-invigorate the issues and to take inquiries in more profitable directions." - David Washbrook, Fellow, History, Trinity College, Cambridge