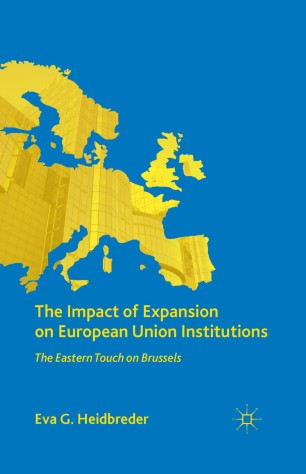 The Impact of Expansion on European Union Institutions

The Eastern Touch on Brussels

How does policy-making trigger the institutionalization of steering capacities? This book investigates this question by tackling why the European Commission expanded competences that were intentionally limited to the specific pre-accession context prior the 2004/07 EU enlargement.

EVA G. HEIDBREDER Lectures on Public Policy and European Studies as a Postdoctoral Researcher at the Hertie School of Governance in Berlin. She obtained her PhD in Political Science at the European University Institute in Florence after completing various degrees in EU Studies in Vienna, Osnabrück, and London.

"Based on impeccable methodological underpinnings, the book explains how and when the action capacities of the European Commission go beyond the Treaties with the benevolence of the Member States. In five cases, an illuminating and surprising view of the real life of the Union." - Giuliano Amato, Member of the Senate of the Italian Republic

"The hidden side of the EU s enlargement to the East of Europe is revealed in this enlightening and theoretically sophisticated book. Against the generally held assumption that widening the EU precludes the deepening of EU integration, Heidbreder demonstrates conclusively that the accession process actually increased EU Commission action capacities in ways unanticipated by the Treaties - but only in certain cases. The EU Commission was able to gain creeping competencies primarily in those areas where it was able to frame policies in non-political ways, as distributive or as low-key soft regulation - the cases of administrative capacity building, cross-border cooperation, and minority protection. Where policies were seen as political, or as impinging on national competences because involving hard regulation or redistribution, by contrast, they were stopped by the member-states - as with nuclear safety and anti-corruption policy." - Vivien A. Schmidt, Jean Monnet Professor of European Integration, Boston University