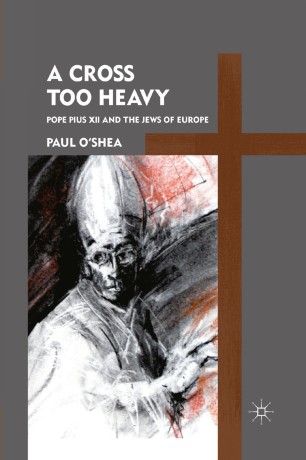 A Cross Too Heavy

Pope Pius XII and the Jews of Europe

The papacy of Pius XII (1939-1958) has been a source of near-constant criticism and debate since his death, particularly because of his alleged silence during the Holocaust. Paul O'Shea examines his little-studied pre-papal life to demonstrate that Pius was neither an anti-Semitic villain nor a 'lamb without stain.'

PAUL O'SHEA Australian historian and educator whose research has focused on Pope Pius XII and Catholic responses to the Holocaust. A founding member of the Australian Institute of Holocaust and Genocide Studies, he lives in Sydney and is the Senior Religious Education Coordinator at St. Patrick's College, Strathfield, Australia.

"A Cross Too Heavy, the thoughtful work of the Australian historian Paul O'Shea, provides insight and understanding that might otherwise be lost in the maelstrom of anger still generated by Pius' refusal to issue a clear and unambiguous condemnation of the Nazi campaign of genocide against European Jewry. O'Shea's well-researched and economically written account sheds light not only on the complicated man who became the leader of the world's largest religious body, but the highly complicated and contentious times in which he assumed that leadership. As Jews demand more information on those troubled times and fateful decisions - and as the Roman Catholic Church ponders whether Pius is worthy of sainthood - A Cross Too Heavy is timely, relevant and fascinating." - Intermountain Jewish News

"A Cross Too Heavy is an indispensable addition in the continuing debate over what Pope Pius XII did, and did not do, to help save Jews during the Holocaust. O'Shea's meticulous and balanced scholarship places the limited available evidence in much needed perspective. His discerning analysis and conclusions about Pius's tragic flaws make it clear that the Vatican must release all relevant World War II secret archives now - for the sake of Holocaust survivors and their families, and for the sake of historical truth." - Abraham H. Foxman, National Director, Anti-Defamation League

"O'Shea's volume is a fine, balanced summary of what we presently know about Pius XII's actions with respect to the Jewish people during the Nazi era. It is particularly valuable for its setting of the discussion regarding Pius XII in the wider context of the dynamics within institutional Catholicism during that period. No credible examination of the papal record can exclude its detailed evidence." - John T. Pawlikowski, OSM, PhD and Director, Catholic-Jewish Studies Program, Catholic Theological Union, Chicago

"This book offers a new analysis and understanding of the role played by Pope Pius XII during the Holocaust. O'Shea gives a careful and detailed overview of the biographical, historical and theological framework for the Vatican's response to National Socialism and the persecution and murder of Europe's Jews. Avoiding polemic, O'Shea goes to the heart of the issues and controversies that surrounded Eugenio Pacelli. The result is a fascinating and complex portrait of Pope Pius XII and the decisions he made. This book is a significant contribution to the historiography of the Holocaust and an invaluable contribution to the ongoing conversation about the role of the churches during that event." - Victoria J. Barnett, General Editor, Dietrich Bonhoeffer Works, English Edition and author of Bystanders: Conscience and Complicity during the Holocaust

"O'Shea gives us a fresh look at Pius XII and at the current debate over the pope's behavior during the Holocaust. With a keen eye to context - the context of the Church and its history; the context of Europe during the war years; the context of debates over authority and institutional religion since the 1950s - O'Shea renders a bold verdict on Pius XII. Among the many books about the pontiff that have been published in the past fifteen years, O'Shea's work shines bright for its unflinching scholarship and judgments. Laying bare Pius XII's logic and the basic moral flaws of his reasoning, O'Shea's work is as intrepid as it is troubling." - Debórah Dwork, Rose Professor of Holocaust History and Director, Strassler Center for Holocaust and Genocide Studies, Clark University