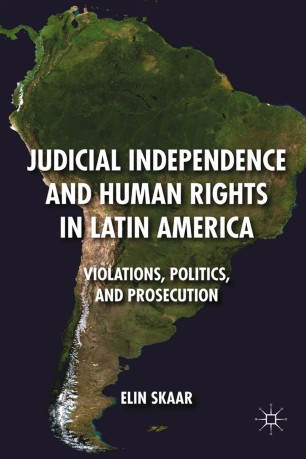 This comparative analysis, focusing on Argentina, Chile, and Uruguay, explores the complex relationship between executive politics and judicial action, showing that judicial independence is a crucial factor in prosecution. It will engage Latin Americanists as well as all who are concerned with justice and human rights around the world.

ELIN SKAAR Senior Researcher and head of the Transitional Justice Research Programme at the Chr. Michelsen Institute in Bergen, Norway.

"The scholarship on transitional justice has flourished in the last decade. But few have analyzed the connections between transitional justice and judicial politics. Elin Skaar's book does just that. It explores in the cases of Argentina, Chile and Uruguay the role of courts in shaping options and trajectories of post-transitional justice - and concretely the chances of criminal prosecutions for past crimes. The volume greatly enriches the theory and empirical knowledge of the political and institutional complexities that shape transitional justice outcomes as these unfold. Through this scholarly contribution we are one step closer to bridging our understanding of how past legacies and the future of post-transitional processes are connected." - Pilar Domingo, ODI

"Elin Skaar's new book traces the importance of judicial reform and judicial independence in the move from amnesty and impunity towards trials in the Southern Cone of Latin America. She contests the idea that the insistence on justice by courts in Chile, Argentina and Uruguay is simply a matter of implementing executive preferences. Rather, she finds that judicial independence and arrangements played a key role. Her research adds a welcome focus on judicial actors to the literature on transitional justice, Latin American politics, and the relationship between politics and law. She also tells a number of fascinating stories, particularly the little-known case of Uruguay, where her work sheds new light and entails sharp analysis." - Naomi Roht-Arriaza, Hastings College of Law, University of California

"This book is a thoroughly researched and cogently argued study about the issue of prosecutions for human rights violations and other atrocities in several Latin American countries. Prosecutions are a major component of the area of theory and practice known as transitional justice, a relatively young field of law, ethics, and politics which has increasingly attracted the attention of practitioners and academics since de 1980s. Because the basic tenets of this still emerging field have not yet been settled there is a particularly lively debate about them. Thus, one does not need to share all the views contained in this book to conclude that it is a significant contribution to the academic literature on this topic and that it will enrich the ongoing discussions on how to address a legacy of human rights violations as part of a process of building or rebuilding a society that respects human rights and abide by the principles of the rule of law." - José Zalaquett, Co-Director, Human Rights Center, University of Chile

"The outstanding comparative research work of Elin Skaar about the legacy of human rights violations in the Southern Cone reaches a high in this book, in which she combines theoretical knowledge about retributive justice and the relationship between the executive and the judiciary, with the empirical analysis of the judicial treatment of human rights in post-dictatorial Argentina, Chile, and Uruguay and in general, with the role of transitional justice. This book, combining analysis of the judiciary, government structures, constitutional reforms, human rights accountability, transitional, and post-transitional justice is not only an excellent piece of research work but also constitutes an extremely necessary reading for all those interested in transitions to democracy in Latin America and elsewhere." - Mario Sznajder, Chairperson, Department of Political Science, The Hebrew University of Jerusalem