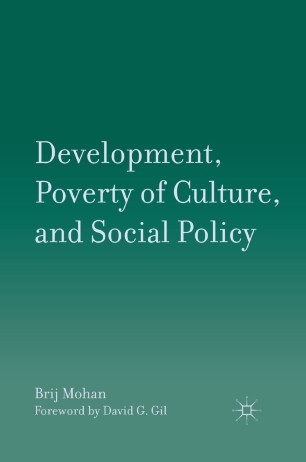 This book offers an interdisciplinary analysis of complex issues, constructs, and interventions that deal with human-social problems with global implications. It posits social development theory and practice in a critically important context challenging the scientific orthodoxy of our times.

"This complex book is no less than an indictment of humanity s progress as we enter the second decade of the twenty-first century. . . . I would like to recommend this book to those students, academics, and practitioners of social development. It is stimulating, scholarly, and discomforting." - R. Kowalski, Research on Social Work Practice "The practice of international development has long been waiting for a clear-eyed critique of its missteps and failures. Wait no more. Mohan has provided an antidote to the embedded romanticism of patronizing efforts to save the poor from themselves. Remarkably,this bookis argued with a credible, erudite humanism and a pervasive decency." - William M. Epstein, Professor, University of Nevada, Las Vegas

"Long overdue is a book that squarely skewers the international development paradigm that has dominated the last three decades of development practice. Professor Mohan provides a powerful critique of the status quo and a cautious proposal for a more humane alternative." - Mark Lusk, Professor & Chair, Associate Dean for Academic Affairs, College of Health Sciences, The University of Texas at El Paso

"For over four decades, Professor Brij Mohan has focused his professional life on the promotion of social justice and the eradication of poverty. In this book, his latest foray into the critical analysis of existing models of social development, Dr. Mohan deconstructs widely accepted shibboleths such as the culture of poverty, nation-building as a poverty-eradication strategy, and hegemonic, coercive political processes.Scholars and students interested in genuine global development and social planning will find this volume a welcome counterpoint to commonly accepted yet apparently failed perspectives." - Bruce Thyer, Professor and Former Dean, Florida State University

"At last! A detailed and informed critique of Oscar Lewis concept of The Culture of Poverty. From Schools of Social Work and Public Administration to the highest levels of policy-making, Lewis work has guided our thinking about the notion of poverty. By reframing this concept as a political issue not an economic one, Mohan challenges us to re-think our guiding principles on this fundamental problem." - Kenneth I. Millar, Ph.D, Dean, College of Health and Human Services, California State University, Long Beach

"As the noted David Gil has said, after several decades of professional and personal relationship with Professor Brij Mohan, I have come to consider him an innovative educator and editor, a leading scholar, thinker, and a prolific author on the human condition, human development, and social welfare. Prof. Mohan, a noted scholar and author of many works, the Habermas of Social Work, has again applied his vast erudition, this time to the subject of the devastating poverty that painfully grips so very much of the world, in his book, Development, Poverty of Culture, and Social Policy." - Thomas D. Watts, Professor, University of Texas at Arlington

"Drawing uponmany sources, including his ownimmense body of scholarship,Dr. Mohancontends that poverty is apolitical issue more than an economicissue.After deconstructing the widely-accepted Culture of Poverty theory, he goes on to propound a more reasonable and theoretically sound Poverty of Culture which is a philosophically interdisciplinary, global and holistic framework. One day, I suspect, some economist will earn a Nobel prize on one of the constructs offered by Brij Mohan." - Frank Raymond III, Distinguished Dean Emeritus, University of South Carolina